OnePlus is all set to launch its next flagship smartphone, the OnePlus 5 on Tuesday and company is not leaving any chance to create buzz over the internet. OnePlus is already teasing from weeks, almost everything, from design to specifications about the device has been leaked and we already know how this device will look like and what it will have inside of it. The only thing which was unclear as of now was its price, and now it seems to be known now as well. 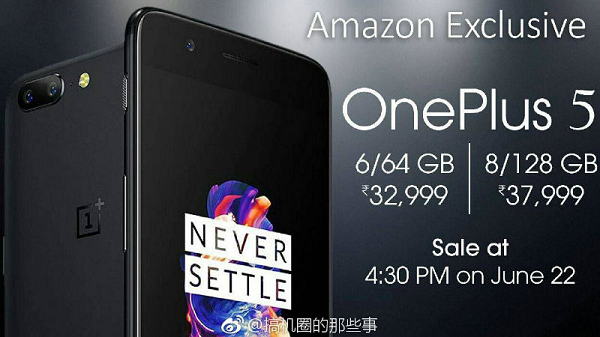 We have already seen the official Twitter handle of OnePlus teasing dual camera capabilities of OnePlus 5 which clearly hints it will have a dual camera set up at back.

As per the leaks, OnePlus 5 is expected to feature a 5.5-inch full HD display, but the body could be slimmer and smaller than OnePlus 3T, under the hood it will be powered by Snapdragon 835 and will come in two variant, 6GB RAM with 64GB storage, and 8GB RAM with 128GB storage.

We already know that OnePlus 5 will be launch on 22 June in India and it will be Amazon exclusive, sale of OnePlus will begin same, on June 22 from 4:30 PM

Till we have official announcements, we will suggest you take all these information as a pinch of salt.