Yesterday only OnePlus has confirmed that they will launch this years ‘flagship killer’ smartphone, the OnePlus 5 on June 20, and just after two days of China launch, OnePlus 5 will make its way to India, today company has sent out media invites which confirm launch date of June 22 for India, this event will take place in Mumbai and will starts at 14:00, and if you are interested then company will be live streaming for you as well. 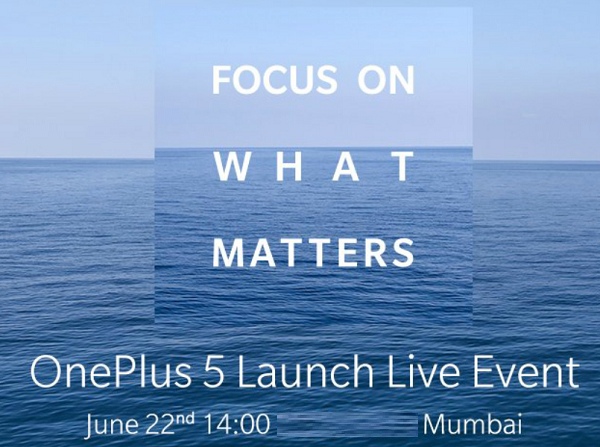 Media invites read out the message “Focus What Matter” which suggest the company will be talking much about the camera features of this phone, earlier company has said they are working with  DxO to make a better camera for the smartphone.

Earlier there was news that OnePlus 5 will come with dual camera setup at the rear, and focus here could mean depth of field effect could be the feature of the rear dual camera.

The company is launching OnePlus 5 just after two days which suggest the importance of Indian market for OnePlus, even company has announced the discontinuation of OnePlus 3T in the global market but OnePlus India team has confirmed that the OnePlus 3T will be available till later in 2017.

Almost all features of this upcoming device has been leaked, OnePlus 5 is expected to feature a 5.5-inch full HD display, but the body could be slimmer and smaller than OnePlus 3T, under the hood it will be powered by Snapdragon 835, and it might come in two variant, 6GB RAM with 64GB storage, and 8GB RAM with 128GB storage.

Amazon India has also confirmed that OnePlus 5 will be exclusively available on Amazon India from 22 June.

We will be covering this event, and will report from ground zero, if you have any question, then do comment below.