Virtual reality is still at its very early stage, there are few good VR headsets available in the market which takes your 3D content viewing to next level but they comes at a very high price and not everyone can afford it to play games or watch any other 3D contents. Then there is Google Cardboard, which is good for those who want to get their hands on first VR headset and want to understand how things work on it. 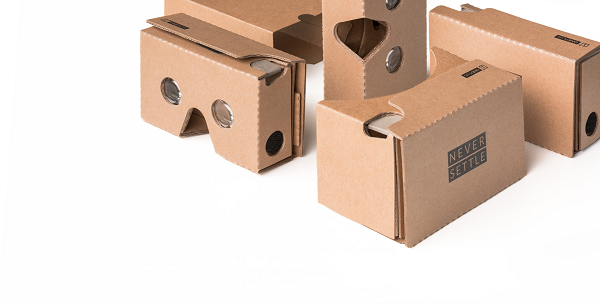 Last month OnePlus has announced that they are going to launch their next flagship smartphone, the OnePlus 2 on July 27th and users can view launch event on VR headset which will give them a feel that you are in the launch event itself. I am sure not everyone can afford those costly VR headset, but as it’s the very first time we are seeing any launch event happening on VR then I am sure you must want to try it out.

Company has said that this cardboard kit fulfills all norms and specs which were mentioned in Google I/O 2015. Company has also said that design of these cardboard were modified a bit like now its 20% smaller, but still capable of holding 6 inch smartphone, has got velcro strapped for extra durability, forehead stains will also avoided with this cardboard, and major thing which company has included in this is that it has got dirt and oil repellant coating.

From Where To Buy At What Price ?

Now the big Question, When it will be available and from where you can buy it, As OnePlus has exclusive tie up with Amazon for India, so you can order this OnePlus Cardboard 2.0 from Amazon India, sale will begin from third week of July and it will be available for Rs. 99, shipping charges will be applicable extra.

Once it will be available for purchase we will let you know, in the meanwhile do let us know what you think about company’s this move, and are you going to order a cardboard for yourself too or not.