Just few hours ago, we had seen some retail box images of two upcoming smartphone’s, the Google LG Nexus 5X and Google Huawei Nexus 5P, earlier we had seen lots of leaks and rumors about these smartphone and almost each and every details of these smartphone’s has been confirmed through those leaks, now to bring more heat, Amazon India has listed this smartphone on their website, later it was removed but it was too late. 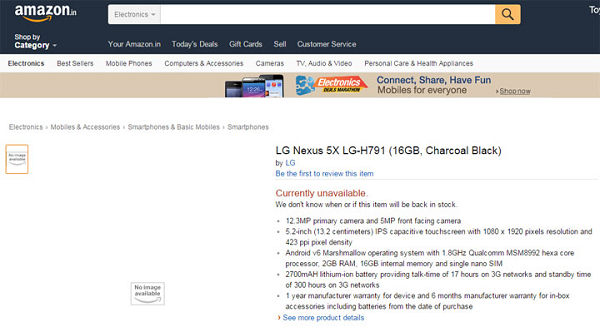 The listing was first spotted by FindYogi,LG Nexus 5X with model number of LG-H791 has been listed on Amazon India and as per listing it will be available in three colors, Ice Blue, Charcoal Black, and Quartz White, and the page shows product is ‘Currently unavailable’.

Listing also reveals specs and features of this smartphone which is like 5.2-inch full HD (1920×1080 pixels) IPS display with a pixel density of 423ppi, under the hood it will be powered by 1.8GHz Qualcomm Snapdragon 808 hexa core processor along with 2GB of RAM, comes in 16GB internal of internal storage.

When it comes to photography front, it features an 12.3-megapixel rear camera with LED flash, and a 5-megapixel selfie camera, for connectivity options include single SIM card slot (nano SIM), 4G LTE support, Wi-Fi, and Bluetooth, it will houses an 2,700mAh battery, which can last for up to 17 hours of talktime and up to 300 hours on standby mode, and it will run on Android Marshmallow.