Today, two big players of mobile industries has launched their respective flagship devices for Indian market, where Asus has launched Zenfone 2, Xiaomi has also took stage and they announced their flagship device for India, the Xiaomi Mi 4i. Both companies hosted a big event in New Delhi. Price of both smartphones are the same, and if you too wanted to buy a device among these two then here is a quick comparison of these two device which gives an idea to you and will help you to select best phone as per your need. 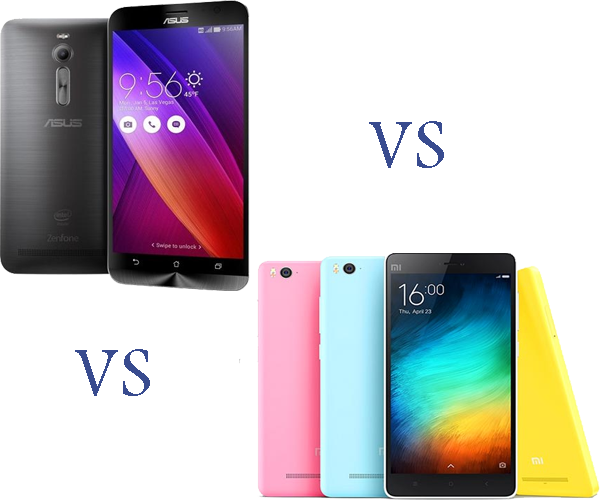 Where Asus Zenfone 2 ZE550ML has got an 5.5 inch HD display screen with pixel density of 267ppi, Xiaomi Mi 4i has got smaller 5 inch display, but its full HD display with pixel density of 441ppi, which means screen is crisp and sharp, apart from this Xiaomi has also introduced Sunlight Display, which dynamically adjusts the contrast of each pixel for crystal-clear images even under direct sunlight.

Both smartphones comes with 16GB internal storage but here Asus Zenfone has edge over Mi 4i, as Zenfone 2 supports memory expansion up to 64GB via micro SD card but its not possible on Mi 4i.

Both phones runs on customized version of Android 5 Lollipop, where Asus has got ZenUI, we have clean MIUI 6 on Mi 4i as well.

If you love to take control of everything on your device like granting permission, display of notification from selected apps, cleaning junks and so on then MIUI 6 is best for you. On the other hand ZenUI is also clean but it comes with lots of software’s which you cant remove from it, but design of ZenUI is also good.

Asus Zenfone 2 ZE55ML is the cheapest variant of all Zenfone 2 announced today and its and Mi 4i price are exactly the same, the Rs. 12,999, but Asus will not follow flash sale model which we have to follow on Mi 4i.