Its well true that nowadays most of us spend our time on social networking websites like Facebook, Twitter and so on, out of them Facebook is the most widely used. You can find plenty of social networking sites being launched every second day with some extra and unique features, and two Indians Gurnam Sunny and Inderdeep Bassi has launched an Social Networking App named Aashiqui, and company claims its very much similar to Facebook and it makes easy to use for the users. 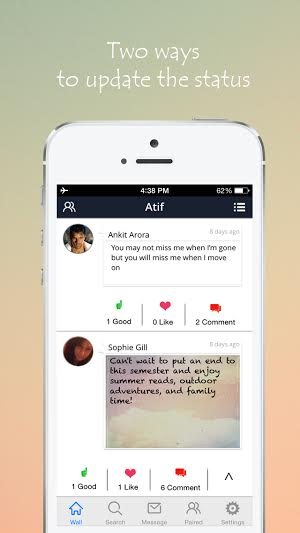 On Aashiqui, you get to set a background “cover” image for your profile, and choose not one but two personal profile photo for yourself. An interesting feature about Aashiqui App is that it allows users to put two profile pictures. Your postings as well as those of your friends (including status updates, photos, check-ins, and the music you’re currently listening to) are uploaded in a straightforward, reverse-chronological timeline.

You can update update statuses in two different ways: users can either update a status the traditional way, or they can use a photo from Aashiqui’s gallery & use it as a background for their status. It offers a wide range of templates that you can add while posting a message.

This app also supports hashtag feature which lets you add hashtag to your photos or status and it makes easier to find when searched by other users who share the same interests.

This app also support instant messenger for group chats which means you can then interact with others who are in groups, you can post status, check-in information, and add photographs, whatever you update to one group is exclusive to that group. This application can also be used for holding electronic conference as well.

Gurnam Sunny, CEO of Aashiqui, said “I was very passionate about computers and technology since childhood and my dream was to make social networking more interesting and unique. Through Aashiqui App you can do everything you do on Facebook. But we have added several unique features.”

Flipkart To Launch Moto G Exclusively In India On 5 February