InFocus, an US based smartphone company has announced that they will be rolling out latest flavor of Android, the Android Marshmallow update for two of its device, the InFocus M812 (Review) and InFocus M370 (Review) which company has launched last month in India, both of these devices, the M812 and M 370 are available online at the price tag of Rs. 19,999 and Rs. 4,999 respectively. 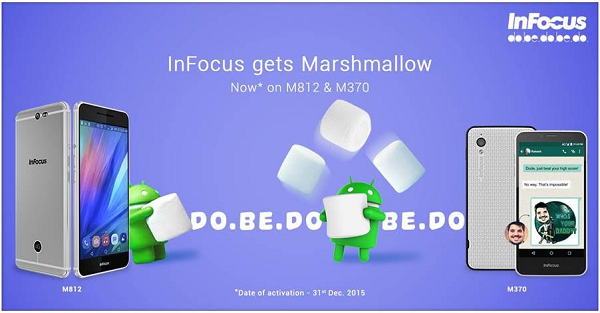 Company hasnt provided any time frame for the update, but just said it will be available by the end of this year, another thing to note here is that company hasnt said anything for its earlier launched device like M808 (Review) or M801 (Review).

Just to remind you the specs, InFocus M812 comes with uni-body design, company claims is created out of a single block of aluminum, has 5.5-inch full HD IPS display screen, protected by Corning Gorilla Glass 3, powered by an 64-bit Snapdragon 801 quad-core processor clocked at 2.5GHz along with 3GB of RAM, 16GB of internal storage which can be expandable via microSD card.

InFocus M370 flaunts 5-inch HD display, powered by Qualcomm’s Snapdragon 210 quad-core processor clocked at 1.1GHz paired with 1GB of RAM and also comes with 8GB of internal storage which can be further expandable via a microSD card up to 32GB.

When it comes to photography front, it features an 8-megapixel rear snapper along with LED flash, and there is also an 2-megapixel front-facing selfie snapper, for connectivity it has options like as 4G LTE, dual SIM (4G+3G), Wi-Fi 802.11n, Bluetooth 4.0, and GPS, it houses an 2,230mAh battery and when it comes to software front, it runs on Android 5.1 Lollipop out-of-the-box with custom skin on top.

This smartphone comes with a pre-loaded features which can turn your face into emoticons which you can send to your friends via different instant messaging apps.