HTC was expected to launch its next flagship smartphone, the HTC One M10 or just HTC 10 at Mobile World Congress, but they skipped it and now it’s rumored that company might launch it sometime in April, what this means is more and more leaks in coming weeks, popular leakster @evleaks has leaked a press rendered image of this upcoming smartphone which shows from almost all angles and gives us a fair idea how it is going to look. 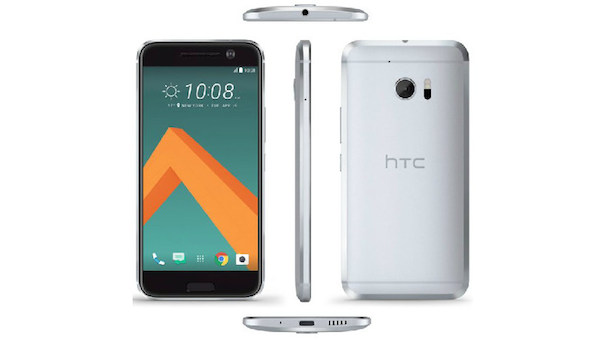 From the image we can see this smartphone will have a metal unibody design with chamfered edges, at back you will find a camera module, dual tone LED flash, laser autofocus module, secondary microphone, antenna lines and HTC logo.

As earlier leaks have suggested, there will be no brand logo at the front of the device, there is a home button just below your display and it will have fingerprint scanner embedded in it, you will find volume rockers and power/sleep buttons on the right side while on left side you will find SIM tray.

At the top, you will find your 3.5mm audio jack for your headphone and at the bottom side, you have USB Type-C port along with speaker grill and primary microphone of the device.

Till now rumors have suggested that HTC 10 will sport a 5.2-inch WQHD display, under the hood, it is powered by Snapdragon 820 along with 4GB of RAM, and will come in 16GB/32GB/64GB storage variants with microSD card slot.