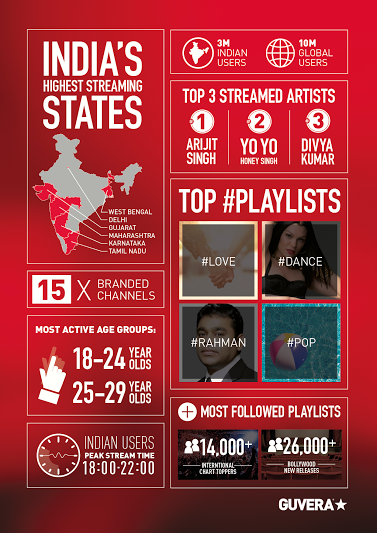 This milestone follows hot on the heels of Guvera’s acquisition of blinkbox Music in the UK from Tesco in January 2015, which brought with it 2.5 million registered users. One of Guvera’s fastest-growing markets, India, has also just recently celebrated its 3 millionth user, representing significant growth since launching in November 2014.

The research points out that amongst the Indian user landscape, the states of West Bengal, Delhi, Gujarat, Maharashtra, Karnataka, and Tamil Nadu are India’s top music streaming states. Amongst these findings, it was also seen that India’s top 3 streamed artists were Arijit Singh at No.1, followed by Yo Yo Honey Singh at No. 2 and Divya Kumar at No.3.

Top category of playlists that resonated most with the users were #LOVE, #DANCE, #RAHMAN (music by renowned music director, AR Rahman) and #POP. Lastly, the research also throws light on the demographics that are most active with the age groups between 18 – 24 years and 25 – 29 years emerging at the top.

Darren Herft, CEO, Guvera Limited said – “As a young brand, we welcome the 10 millionth user to the Guvera platform with a real sense of pride and delight, We’re thrilled to see Guvera’s global community growing daily and we hope to bring more music lovers on board as we enter new markets in 2015. We believe our growth is also testament to the success of our unique non-disruptive ad-funded model, which allows our users to discover and play the best expert curated music’’.

Globally Guvera has joined hands with one of the biggest smartphone and PC makers, the Lenovo and in future you will see Guvera app pre loaded onto Lenovo smartphones and tablets.

Can You Trace Switch Off Phone? NSA Can