We all know what happened with Samsung Galaxy Note 7, company had very high hope with Note 7 but all burnt or blasted with the device, and now company surely working day and night to make sure they will repeat the success story of Samsung Galaxy S7 with Galaxy S8 and that’s why as of now we havent got any solid leak or news about this upcoming device, but we will get as we move closer to the launch date. 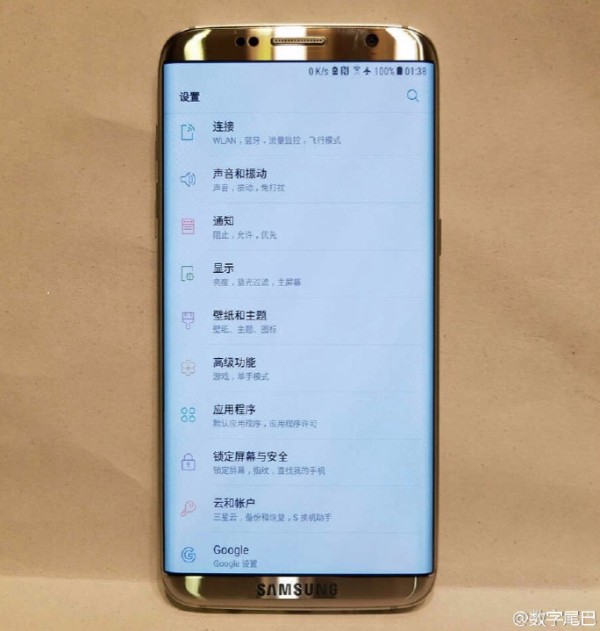 Today an image surfaced online which seems to be of Samsung Galaxy S8, it shows curved display with very thin bezels, exactly which most of us were hoping. Earlier there were rumors that Samsung is planning to remove all physical and capacitive buttons from Galaxy S8, but in the above image we could not see any on-screen buttons as well.

We might see Iris scanner back in Galaxy S8 which was introduced in Note 7, and as reported earlier, Samsung could use an under glass fingerprint sensor on the S8, due to which there was no further need for physical button and company has decided to omit it.

Samsung Galaxy S8 might be launched in two variants, 5.5 inches and 6 inches variant, the bigger one could be named as Galaxy S8 Plus, both will be Super AMOLED quad-HD display, they will be powered by 10nm processor, Snapdragon 835 or the Exynos 8895 octa-core processor depending upon where the smartphone in launched.

They will run on Android Nougat which will be wrapped under TouchWiz UI. There are lots of information which we still dont know like its camera, when it will be launched and lots more, so stay tuned for all latest updates.