Last week Realme has launched its latest offering for Indian market, the Realme X which comes with some nice set of specs, at least on paper, and then couple of days back Oppo has also launched its latest offering, the Oppo K3 in India, and as soon as Oppo has launched K3, people has started turning their heads, because Realme is the sub brand of Oppo and Oppo K3 looks very similar to Realme X, so why a company would compete with its own sub-brand, well there are some difference among these two smartphone which will be discussing in this post. 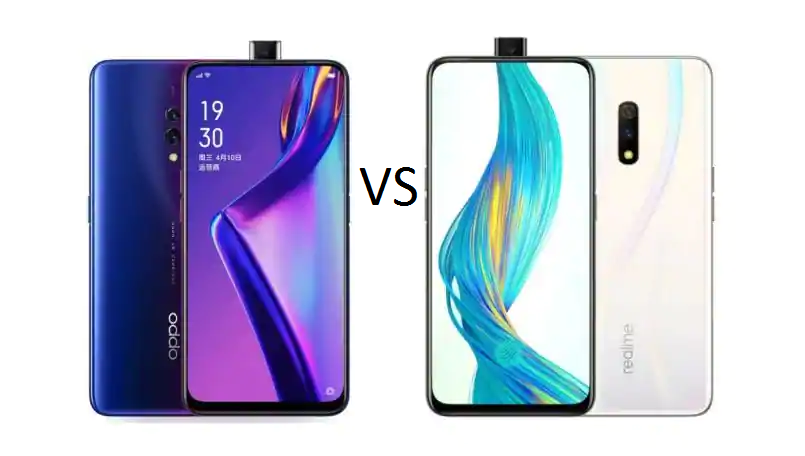 Lets Start with build and design of both of these smartphones, both phones might look very similar to each other, but they are different, like Oppo K3 has glass back panel which goes all the way to screen, but on Realme X, you have metal frame which separates the back and the front of it.

Both smartphones comes with AMOLED display and there is not notch or punch hole on the display.

As told earlier, both phones has full view display without any notch or punch hole, both has 6.5-inch AMOLED display screen with a resolution of 2340×1080 pixels, supports 19.5:9 aspect ratio and it is protected by Corning Gorilla Glass 5.

Under The Hood Features –

When it comes to under the hood features, both smartphones has got same SoC, which is Snapdragon 710, but has different variants in terms of RAM and Storage.

Both smartphones comes with same 16MP pop-up selfie camera with f/1.7 aperture, but the real difference is in rear snapper in which Oppo K3 seems to be behind, Oppo K3 features a dual-camera setup with a 16-megapixel primary camera and a 2-megapixel depth-sensing camera, whereas Realme X also has dual camera setup of 48-megapixel primary sensor and a 5-megapixel secondary depth sensor.