LG has announced its flagship smartphone, the LG G5 at the ongoing Mobile World Congress 2016, this smartphone not only features some high end specs, but it also comes with a new feature, which is modular design language which lets you unlatch the bottom part of the device. LG has announced six modules at the event which are 360 CAM, 360VR, Rolling Bot, Tone Platinum, Smart Controller and H3 by B&O Play, these accessories will enhance the performance of the device and you can get more from the device. 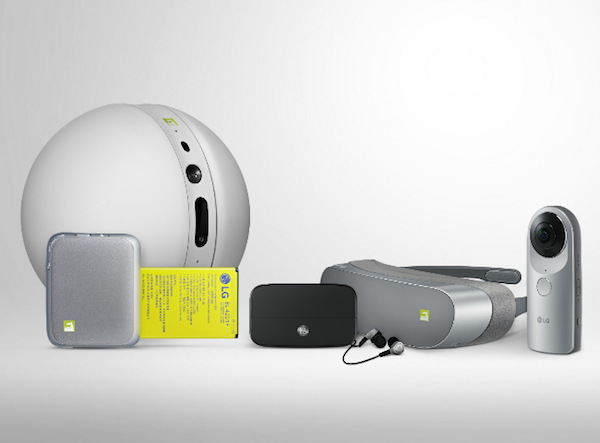 LG 360 VR:- The LG 360 VR is a VR goggle that can be connected with the G5 via a dedicated cable and works exclusively with the G5 to simulate a 130-inch TV viewed from two meters away. It has a stylish design that is foldable so that users can easily carry and watch VR content anytime, anywhere.Unlike other VR devices that require smartphones to be inserted in the device, the LG 360 VR weighs only 118g (4.16 ounces) and is just one-third as heavy as competing for VR goggles while delivering a resolution of 639 ppi. The device is compatible with 360-degree images and videos captured with LG 360 CAM as well as all Google Cardboard content.

LG 360 CAM:- The LG 360 CAM is a compact 360-degree angle camera equipped with two 13MP 200-degreewide angle cameras, 1,200mAh battery and 4GB internal memory, which can be supplemented by a microSD card. The LG 360 CAM can be easily connected to the LG G5 allowing users to create 360-degree content. The LG 360 CAM provides 2K video and 5.1 surround channel recording on three microphones to help users effortlessly create high-quality 360-degree contents. Thanks to the partnership with Google, images taken with the 360 CAM can be uploaded to Google Street View and YouTube360, adding the fun of sharing creative contents with others. The images will also be available to view on the LG 360 VR or other smartphones or devices that are capable of 360-degree content.

LG Rolling Bot:- The LG Rolling Bot is a companion device that rolls like a ball while capturing images and videos with its embedded 8MP camera. Not just a toy, the LG Rolling Bot can be used as a monitoring system for the home, pet care companion as well as a remote controller for compatible home appliances. With an IP camera connectable via Wi-Fi, users can remotely monitor the interior of their homes with the LG G5 via live streaming.

LG Tone Platinum:- The LG TONE Platinum (model HBS-1100), the latest in the LG TONE Series, is a Bluetooth headset that has earned the Harman Kardon Platinum grade for its superior sound quality. With aBalanced Armature design for minimum distortion, LG Tone Platinum delivers exceptionally sharp and clean sound. What’s more, it is the world’s first Bluetooth headset equipped with aptX HDcodec, delivering lossless 24-bit audio for sound that is unrivaled in a wireless device.

H3 by B&O PLAY:- H3 by B&O PLAY is a set of high-end earphones that is compatible with the high-quality sound of the LG Hi-Fi Plus with B&O PLAY. Designed for audiophiles as well as anyone who considers audio performance a top-priority in a smartphone, H3 by B&O PLAY works with all Android smartphones.