JioPhone, a 4G feature phone from Reliance Jio has taken Indian mobile phone industry by storm, Reliance has already created a buzz in India with its aggressive 4G plans and now company has announced a new 4G feature phone which is available at Rs. 1500 only that too will be refunded after 3 years, means you will get your money back once you return this phone after using it for 3 years. 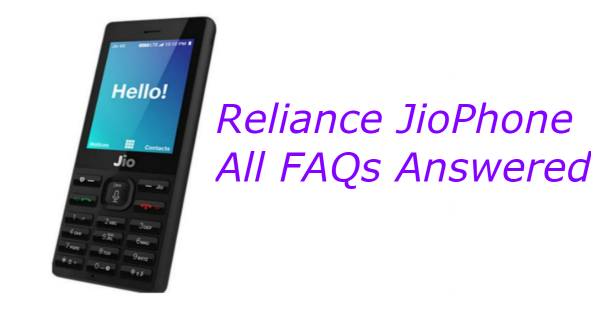 Seems nice deal, but don’t you think there could be some hidden terms, why company will provide phone at such a low price. Well, we have received lots of questions and here we are going to answer most of them.

#1 What is the price of JioPhone and how can I get it?

A. JioPhone is priced at Rs. 1500 which will be refunded to you after 3 years when you return it. You can order this phone via MyJio app, jio.com or by Reliance Store.

#2 When will I get the JioPhone?

A. Reliance has started deliveries of the phone but due to the large numbers of pre-orders, the shipment would get delayed.

#3 Does JioPhone have dual SIM slots?

A. No, it doesn’t have Dual SIM support.

#4 Can I swap in any other SIM into JioPhone?

A. Nope, this phone is locked to Reliance Jio SIM only.

A. No, it doesn’t have support for WiFi hotspot

#6 How much internal storage does JioPhone has, and can I expand its memory?

A. It comes with 4GB of internal storage which you can expand up to 128GB via Micro SD card.

#7 Does JioPhone has camera?

A. Yes, it has got a 2-megapixel camera at the back with no flash, and a VGA camera on the front.

#8 What is the battery life of JioPhone?

A. This phone comes with a 2000mAh battery and being a no-touch feature phone, this battery should last for 2 days without any issue.

#9 JioPhone runs on Android or any other OS?

A. No, it does not run on Android OS, it Kai OS, a forked version of Firefox OS.

#10 Can I install WhatsApp on JioPhone?

A. No, you won’t be able to use WhatsApp on it, however, there is some news that Reliance Jio is working with WhatsApp for a special version of WhatsApp for it, but at this time its just rumor.

#11 If it doesn’t support Android, then from where I can download the app?

A. Well, it has its own app store but the number of the app will be very limited over there.

#12 Do I need to recharge JioPhone after buying it, if yes then of how much?

#13 Does the JioPhone support voice commands?

A. Yes, JioPhone does support voice commands and it will be able to understand Indian accents.

#14 Can I keep device without doing recharge?

A. No, company clearly stated that you have to recharge JioPhone, and in such condition, company can take back device from you and then you will be forced to pay penalty along with GST.

#15 Can I return device before three years?

#16 Can I keep device even after completing three years?

A. No, you need to return the device within three months after completing three, mean you have to return device between 36 months to 39 months from the date of purchase.

#17 What will happen if I lost device?

A. In such case you have to call Reliance Jio and lock down your phone and SIM, your deposit will be forfeited and you don’t have to pay anything else.

#18 Can I cancel my JioPhone pre-order?

A. Unfortunately no, but Reliance Jio does say one can transfer or sell his/her JioPhone pre-order to anyone.

That’s pretty much it guys, if you have any other doubts or question then either comment below or hit us on Twitter.