Google has announced its Project Ara way back, and company was expected to launch the first smartphone under this project in early 2015, but still after a year has gone and device is still waiting to come out of the bag and see the light of the day. Yes, we had some prototypes at developer conferences and some leaks of the device, but now it seems we are going to see the first device under Project Ara very soon as a mysterious device has been spotted on GFXBench website. 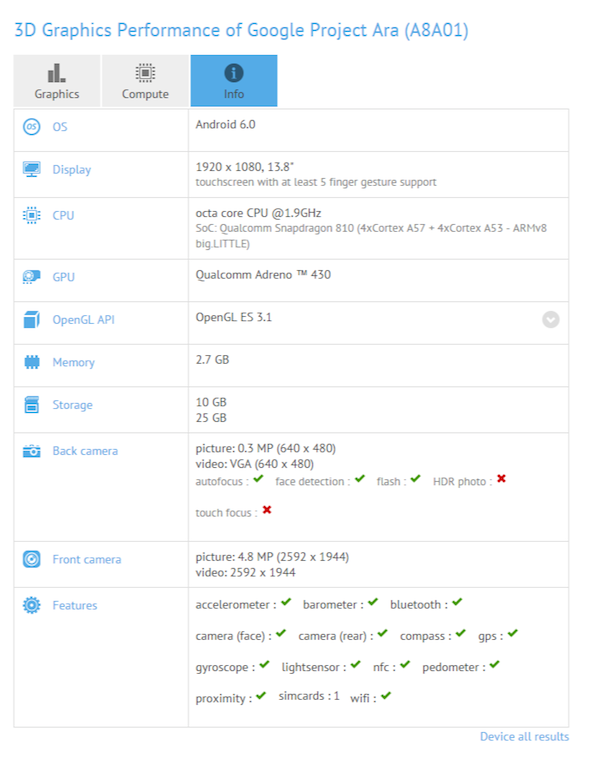 This seems to be a tablet which will have the model number as A8A01, and will flaunt a 13.8-inch full HD (1080p) display, under the hood it will be powered by Snapdragon 810 Octa-Core processor clocked at 1.9Ghz along with 3GB of RAM and Adreno 430 GPU, now a unique thing was spotted and its internal storage which is shown in 10GB and 25GB, and both of them doesn’t make any sense to us.

For connectivity, it will support Bluetooth, GPS, Wi-Fi and NFC, and will also have support for the bunch of sensors, at the rear it will have a  0.3-megapixel rear camera and a 4.8-megapixel front facing shooter and it will run on Android 6.0 Marshmallow.

It’s very difficult to say whether this device will launch or its just a prototype for internal testing, but sudden emerge of Project Ara device do suggest that project is not dead and Google is still working on it. We could hope something from Google at its upcoming Google I/O 2016 which is from May 18 to May 20.