Today at an event Motorola has unveiled its latest smartphone Moto G, it has same design which we had seen in Moto X, same edge to edge display with Gorilla Glass, and curved back. The price of phone starts from for $179 and we had expect this to hit Indian market by early January. 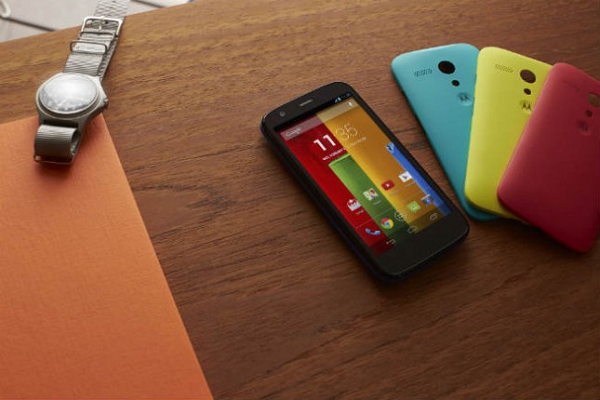 As per specs Moto G flaunt a 4.5 inch display screen with 720p resolution with 329ppi, it is powered by 1.2GHz Qualcomm’s Snapdragon 400 processor paired with 1GB RAM.

Other features of Moto G has 5 megapixel camera at back with LED flash and a 1.3 megapixel camera at front. For connectivity it has support 3G, Wi-Fi, Bluetooth 4.0, GPS and dual-SIM card slot (in selected countries). On software front it runs on Android 4.3 Jelly Bean out of box and Motorola has said device will get Android 4.4 KitKat very soon. Moto G features a water-resistant coating.

It comes with removable back with interchangeable shells. Motorola will also make flip covers and grips. It comes in 8 GB and 16 GB variant, you will also get 65GB of Google Drive. It houses  1950mAh battery, which Motorola claims can deliver up to 30 percent more battery life than the Apple iPhone 5s

If we talk about price the unlocked version of 8GB variant is $179 and 16 GB variant is priced $199 in the US. Motorola will be launching it with its carrier partners around the globe.