Last year Oppo has released its slimmest device, the Oppo R5 which company launched in India earlier this earlier, now it seems Oppo is all set to expand its ‘R’ series and soon company will launch R7 which will be worlds first device which will be almost bezel free display screen. A new video which is floating on internet shows Oppo R7 in action and shows a almost ‘bezel-less’ display screen on it. 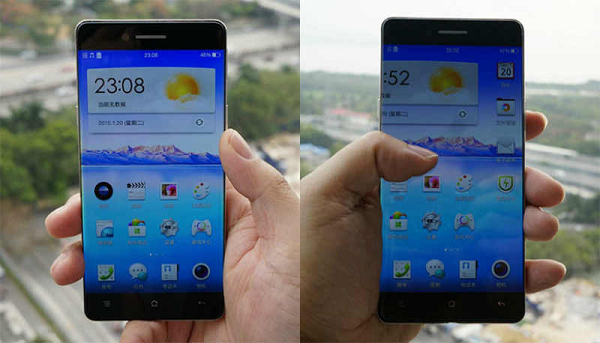 Earlier reports suggested that Oppo R7 is going to use light refraction technology which create an illusion of almost bezel-less screen, here light refraction makes display seems like the panel extends sideways than it actually does in reality.

Apart from bezel less and edge to edge display screen, video also shows quick functions of the music and video player, three android buttons at bottom, and a front camera placed at the top.

As of now what we know about Oppo R7 is that it will be powered by octa-core MediaTek MT6795 chipset; 20.7-megapixel rear camera;4G LTE supports; and just like its predecessor it will ultra-slim at 4.85 mm.