Many times we need to capture our screen so that we can explain something to other, we might shot a tutorial or something like that. ShareX is a freeware and open source tool which lets you capture your screen, its been loaded with lots of feature which might be missing in a paid app. 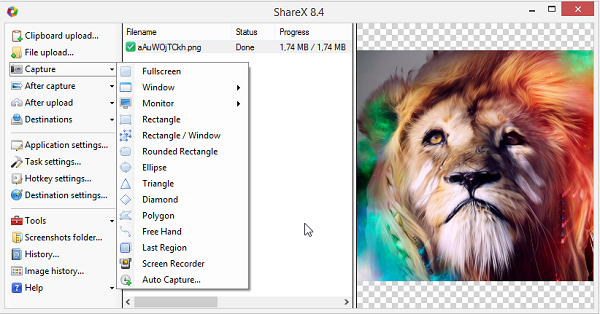 ShareX comes with almost all features which a basic screen recorder needs, it allows you to record a particular area, full screen or even a freehand regions.

It comes with built in editor which lets you annotate image, put effects on images, and you can also add watermark or can auto-added once screen capture is complete.

This app also lets you to auto upload your screen captures to cloud services like Google Drive, Dropbox, Picasa, Box, Flickr, Imgur and so on, and once image is uploaded its URL will be copied to your clipboard so that you can easily share it friends.

Its one feature which we like most is its timer option which will auto capture your screen after an specified time and then upload to your desired destination.

It can save your screencast in video file (mp4) or in animations (Gif). You can tweak with its setting as per your need like you can modify Frame Rates so that you will get a proper video. Its an portable app which means you don’t need to install it and you can run it from USB too.

View And Export All Skype Contacts

Unlock Locked Files And Folders In Windows With File Governor

eScanAV Anti-Virus Lets Scan Your Windows For Viruses, Spyware, Adware and any other Malware

ABOUT US
TechnoArea brings the latest happening of the technology world to you.
Contact us: [email protected]
FOLLOW US
© 2004-2018 TechnoArea (proudly powered by iTechnixNetwork). The content is copyrighted to Rahul Sharma and may not be reproduced on other websites.
MORE STORIES
Portable Application

Hide Or Remove Search Box And Up Button In Windows 8...