We are just few hours away from the launch of Samsung’s next flagship smartphone’s, the Galaxy S7 and Galaxy S7 Edge, and as of now we had seen several leaks and images of these devices, and it is not going to stop anywhere soon, at least not yet as just recently there is retail box image leaked which throw some light on its specs and there is a have hands on video of Galaxy S7 Edge which will be announced later tonight. 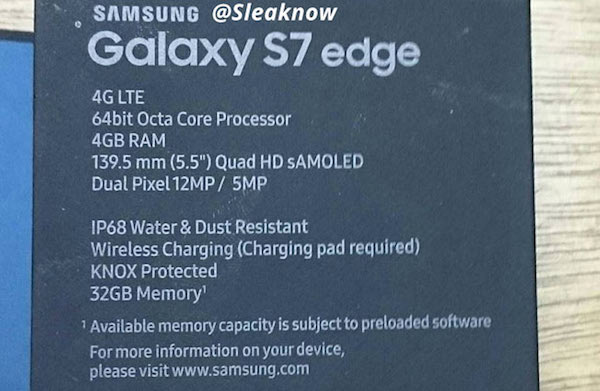 The box which is leaked is quite different from what we had seen earlier with Samsung Galaxy S6, not only it has different design, it also features major specs details of the device, like it will have a 5.5-inch QHD Super AMOLED display, and will be powered by a 64-bit octa-core processor which is most likely to be Samsung’s own Exynos 8890 paired with 4GB of RAM and will have 32GB of internal storage.

For photography, it will have 12MP rear snapper with LED flash and there will be a 5MP front facing camera as well, it will be IP68 certified which will make it water and dust resistance, a battery with wireless charging capabilitie.

When it comes to softwre scenerio, it runs on Android 6 Marshmallow wrapped under TouchWiz UI, and it will also features an Moto X like always on display to show your important notifications.