Last year in the month of December, Samsung has announced a new smartphone under its ‘A’, the Samsung Galaxy A9, now as per the latest news and leaks, it seems company is working on the Pro version of this smartphone which will be known as Samsung Galaxy A9 Pro which has a model number of SM-A9100 and it was recently spotted on Indian Import/Export website with a price tag of Rs 24,179, of course, this price tag is for prototype and final unit price may be higher. 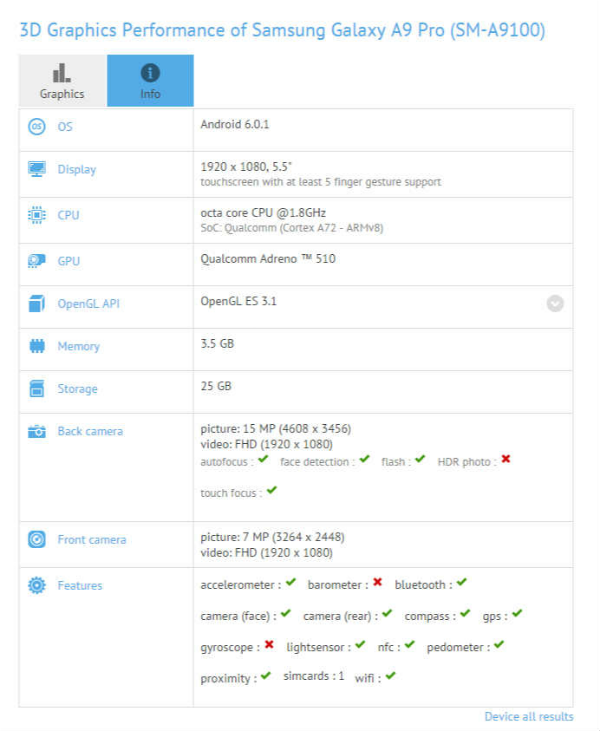 The same smartphone was spotted on GFXBench which shed some lights on its specs, Galaxy A9 Pro is expected to feature a 5.5-inch full HD (1080p) display, one thing to note here is that despite being a Pro model, it has a smaller 5.5-inch display while Galaxy A9 has 6-inch display which doesn’t make sense.

At its heart, it is powered by Qualcomm Snapdragon 652 with Cortex-A72 cores, it’s an octa-core processor which clocked at 1.8GHz along with 4GB of RAM and has internal storage of 32GB, of which 25GB will be user accessible. For photography

In the photography department, it will have a 15-megapixel primary camera, and there will be 7MP front facing the camera as well, and when it comes to software, it will run on Android 6.0.1 Marshmallow OS.