Earlier this month Samsung has announced its latest phablet Galaxy Note III in IFA Berlin, at that time Samsung hasnt announced any date for India launch, but today company has launched this phone in India for Rs. 49,9000/- 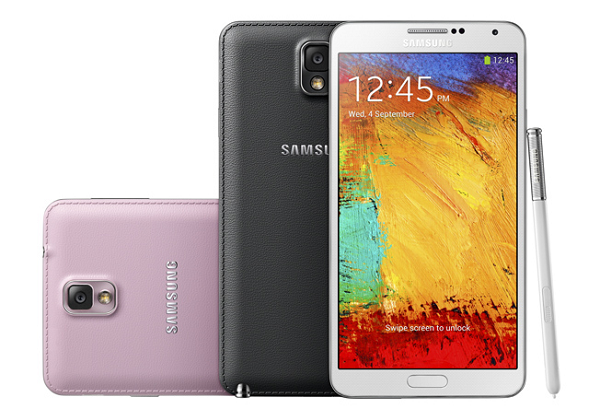 Just to recap, as per design  Samsung Galaxy Note III is thinner, lighter and comes with slimmer bezels if we compare it with its predecessor Galaxy Note II. Rather than having plastic body at the back it has a soft-textured back cover with a serrated pattern on its side.

As per specs, Samsung Galaxy Note III flaunts a 5.7-inch full HD Super AMOLED display screen with 1920×1080 screen resolution, and its powered by an eight-core Exynos 5 Octa chipset ticking at 2.3GHz along with 3 GB of RAM.

Other features include a 13-megapixel rear camera with Smart Stabilization and high CRI LED flash, at front it has  1.9 mega pixel camera. It runs on Android 4.3 Jelly Bean wrapped with Samsung’s TouchWiz UI  and also got Samsung’s Knox mobile security feature.

It also comes with a new and improved S Pen, which has a new Air Command feature that opens a palette of five tools to use the Pen better. It houses 3200 mAh battery and comes in 32 GB or 64 GB variant with memory card option.

As we had also told you Samsung will start shipping it from September 25th at its been prices Rs. 49,900 which is bit high, its most probably due to increase in Dollar rate.