Realme, the sub-brand of Oppo has been good since they had launched their first smartphone. Realme is somewhat only limited to China and India only, and they are only focusing and targeting youth only and it seems to be working for them as they were able to sell good number of units. Now as well know, company is gearing up for the launch of their next flagship smartphone, the Realme X, its getting less and less mysterious for us as we are getting more and more leaks which suggest how this smartphone will look and what this smartphone will have under the hood. 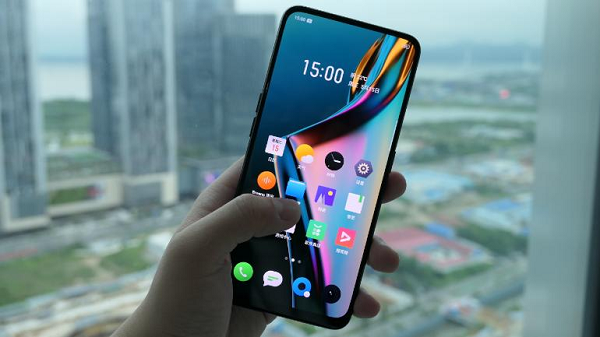 AT the time when we were thinking we are almost done with leaks, company’s CMO came up and took weibo social networking site to show us how this smartphone will look like.

Realme CMO Xu Qi Chase has posted a live image of Realme X which will have notch less display. This image gave us clear look of this upcoming flagship smartphone which has almost bezel less display, but like any other IPS LCD display smartphone, here too you will find thick chin at the bottom.

In order to achieve this full display, company has to move front facing camera behind a sliding mechanism, means here too you will find a pop-up selfie camera.

Here we dont picture of rear of Realme X, but some earlier leaks has suggested that it will have a glass back panel with gradient colors, a dual camera setup with 48MP primary camera.

This phone will have in-display finger print sensor which is in trend nowadays, and when it comes to under the hood specs, it will be powered by Snapdragon 730 chipset along with 8GB of RAM, will have 3700mAh battery with VOOC 3.0 fast charging.

Rest of the details are not known, but we will see it very soon as company is holding launch event on 15 May in China, and we can expect company to launch this phone soon in India as well.