All tech industry is busy with the latest leaks and news of OnePlus 7 Pro, which has been leaked so many times that we know each and everything about the device and we are just waiting for its official announcement. But it seems Asus is also gearing up for the launch of its next flagship smartphone, the Asus Zenfone 6 which could be the answer for OnePlus 7 Pro from Asus, and now company has teased this smartphone on its social networking sites and also revealed the launch date of this flagship smartphone which will launched on May 16, 2019, just couple of days after the launch of OnePlus 7 Pro. 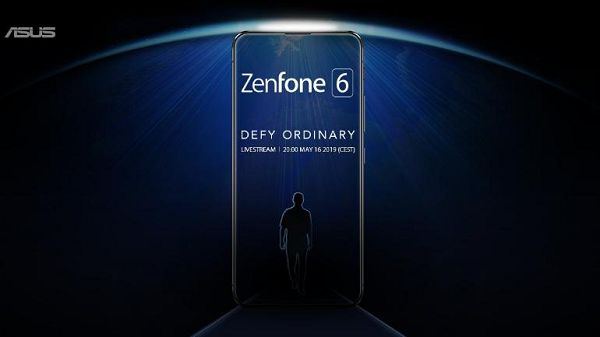 Asus has posted an image on its Twitter account which shows the outline of this upcoming smartphone, and it is in line with the previous leaks which we have seen which has suggested that this smartphone will be have full screen display with no notch, yes there is ear piece at the top which is obvious.

Thing to note here is that its a curved display on side and there is no visible chin on it, but most likely Asus will go with LCD panel then we will see a chin on the device.

If Asus has decided to go with full screen display then we might see a pop up camera which was in trend last year as we had seen from Oppo and Vivo, and OnePlus 7 Pro will also have this kind of camera or Asus could go with sliding camera just like we have seen on Xiaomi Mi Mix 3.

Not much has been leaked about this device, but some leaks has suggested that it will have a triple camera at the rear, and at back you will also have a finger print scanner as well.

Like most of the flagship of 2019, Asus ZenFone 6 might have a 48-megapixel rear camera and there will be a 16MP front facing camera as well.