Well if you ask me Which OS is most useful then I will say Linux, I know many of you shock or don’t agree with me but Linux is a good OS and let me tell you almost all server in world run on Linux systems.

So if you are planning to give a try to Linux then wait before installing any Linux OS you need to know many things because Linux is not for basic users you find many difficulties on using it.

You need to do many tweaks both during installation and after installation so that your system may work fine.

Pinguy OS an out-of-the-box working operating system for everyone, not just geeks,This OS is made for those who never had used Linux and know nothing about the tweaks on Linux.

It includes most user friendly programs which are used to do tasks, Like Shotwell for easily uploading images to Facebook, gtkpod for putting music, photos and video on a ipod/iphone and mvPod for converting the video to a iPod friendly format. 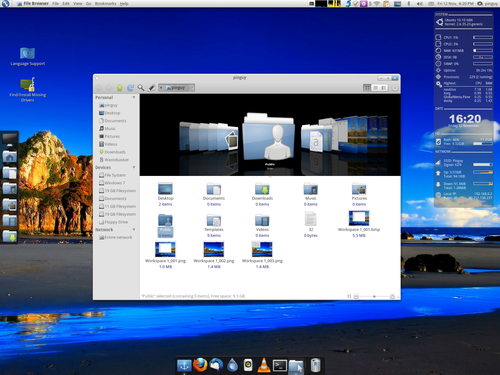 All programs in Pinguy OS have been chosen because of their ease of use and functionality, Author had also changed every file type to open with the right program, like for some reason by default .iso are opened with Archive Manager so they are changed that to open with Brasero Disc Burner.

Pinguy OS is an optimize build of Ubuntu 10.10 Minimal CD with added repositories, tweaks and enhancements that can run as a Live DVD or be installed. It has all the added packages needed for video, music and web content e.g. flash and java, plus a few fixes as well. Like fixing the wireless problems, gwibber’s Facebook problem and flash videos in full-screen.

Everything is set-up for samba, all you need to do is right click a folder you want to share and add a password in samba using system-config-samba.

Nautilus has been replaced for Elementary-Nautilus with added plug-ins so it can get music and video art from the web. The default theme is Elementary using ttf-droid font with Docky and a custom Conky.

DVB support is also added to Totem for anyone with a TV card that wants to watch tv on their PC but doesn’t want to install a dedicated program like myth-tv.

Microsoft Might Launch MS Office Suite For Linux In 2014

[How To] Make Multi Boot Of Windows 7, Windows 8 And Ubuntu

Microsoft Wished Linux On Their 20th Birthday With A video

Microsoft Wished Linux On Their 20th Birthday With A video