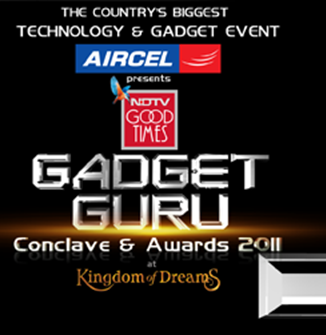 Last Monday NDTV, One of the biggest name in Media in whole world had organized India’s Biggest Gadget Awards, Gadget Guru Conclave And Awards, which took place in Kingdom Of Dreams in Gurgaon, India.

I attended that event and I am very thankful to Rajiv Makhni who invited me there,The event was hosted by tech gurus like Vikramaditya Chandra aka Vikram Chandra, Senior Editor of NDTV and CEO of NDTV Network, and Rajiv Makhni who is also known as Tech Man of India.

In the conclave session 2 hot discussion went, First topic was Impact Of 3G In India, It was hosted by Vikram Chandra and in panel :-

Every member of panel put some good points which showed that 3G is going to be very helpful in India in coming years.

Second topic was Is The ERA Of WOW Technology Is Over, It was hosted by Rajiv Makhni, and panelist was:-

I totally enjoyed both sessions and agreed on lots of points with the panels members.

After conclave awards session was held but a break was given of approx 30 mins in which drinks and snacks was given and we are also allowed to take hands on review on few devices like Samsung Galaxy Tab, Dell Venue etc which was put by Aircel.

After that break Award session was started in which Hussain performed a outstanding dance and Rajiv Makhni also make stunning Flying Entry.

After that awards ceremony started and following awards has been awarded :-

I enjoyed whole event, It was very awesome to attend the countries biggest Gadget Awards.And ya at last I would like to thanks Rajiv Makhni for inviting me on this wonderful event.