Today, Micromax sister company, Yu has launched its latest flagship device, the Yu Yutopia which company has been teasing from couple of months, and today finally they took the wrap from this device. Company is calling it one of the most powerful device in planet which is from India. It comes with good set of hardware and features but its not something new or which we haven’t seen anywhere before. 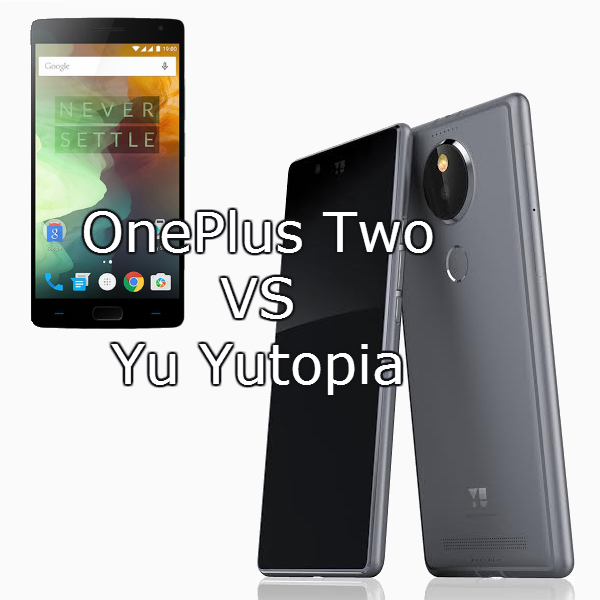 OnePlus Two, which company has launched couple of months back has also got similar specs and is available at the same price tag, which is Rs. 24,999, if you are confuse between these two devices then lets try to solve your confusion, or increase it a bit more :P.

But again as we had said in past, a human eye is not able to recognize anything beyond Full HD and this is more than enough on any smartphone.

Here Yutopia seems to be the winner as it has got 32GB onboard storage along with support for Micro SD card to further expand memory, whereas OnePlus Two is stucked with 64GB of storage and dont have SD card support, but again 64GB might be more than for many of you.

On paper Yutopia seems to be the winner as it has got 21MP rear camera with LED flash, Phase Detection Autofocus (PDAF), Optical Image Stabilization (OIS), and HDR whereas OnePlus Two has got 13Mp rear snapper with with laser autofocus and OIS, both devices can shot 4K videos from rear camera’s.

At front Yutopia has got 8MP wide angle camera and OnePlus Two has 5MP front facing camera. One thing we would like to tell you that mega pixel not always count, it doesnt means more MP means better images, so we would like to reserve our final words till we get review units.

Both smartphones support all necessary connectivity terms like WiFi, Bluetooth and GPS, 4G/LTE is supported on both devices on both SIMs.

OnePlus Two comes with bigger battery of 3,300mAh whereas Yu Yutopia has got 3,000mAh battery, Yutopia also supports Quick Charge 2.0 which can charge the battery from zero-60 percent in only 30 minutes as per company’s claims.

Both devices comes with fingerprint scanner which is a kind of norm nowadays, on the other hand OnePlus Two also comes with USB Type-C port.