Last year Chinese company, Xiaomi has said that they will launch their tablet, the Mi Pad in India along with Xiaomi Mi 4, however this could happened but now it seems that company is gearing up for the launch of Mi Pad in India along with Redmi 2 which is the successor of highly popular and successful Xiaomi Redmi 1S, if all goes right then we could see both devices being launch in India on 12th March. 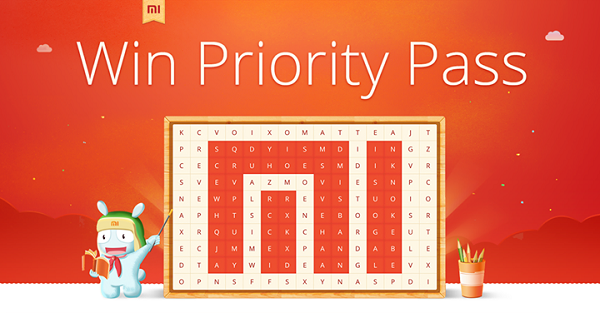 Xiaomi India has posted an contest its Facebook page, the contest is a puzzle game on which company is asking fans to find hidden words and Xiaomi is claiming that something is coming out and winners of these puzzle game will get priority passes which means they can buy devices without going through flash sale.

It doesnt take much time for fans to decode the puzzle and this puzzle has got words like Nvidia, Kepler, Movies, Snapdragon, Expandable, Wide Angle, Micro SD, Quick charge LTE, HD, Dual SIM, Lighter OS, Android, Books, Cortex and so on which possibly suggest that Xiaomi is coming up with Mi Pad.

Not only this when you further decode puzzle you will also find words like Snapdragon, wideangle, expandable, matte, and quick charge which seems to be good hints for Redmi 2 which was announced in January this year.

Xiaomi Mi Pad, flaunts a 7.9-inch IPS display screen with screen resolution of 2048×1536 pixels with 326ppi and aspect ration of 4:3, the screen is protected by Corning Gorilla Glass 3 protection. Under the hood its powered by a 2.2 GHz NVIDIA Tegra K1 processor with 192-core Kepler GPU along with 2GB of RAM.

At back Xiaomi Mi Pad features an 8-megapixel rear camera and has a 5-megapixel front-facing camera too, it houses a non-removable 6,700mAh battery which can provide 8 hours of music playback, 11 hours of video playback and 1,300 hours on standby mode. If we talk about software , then Xiaomi Mi pad runs on customized version of Android KitKat aka MIUI.

Whereas Xiaomi Redmi 2 flaunts a 4.7-inch HD IPS display screen with screen resolution of 1280×720 pixels with a pixel density of 312ppi, if we talk about uder the hodd features then it is powered by a 64-bit 1.2GHz Snapdragon 410 quad-core processor paired with Adreno 306 GPU and 1GB of RAM.

The contest is still open and if you are interested then you can visit Mi Facebook page to take part in it. We are expecting Xiaomi to price Redmi 2 somewhere around Rs. 7000/-

Obi Python S452 Announced, Has LG G3 Like Back Button And...