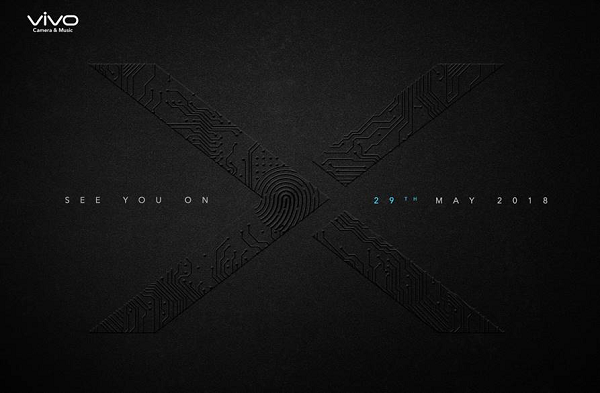 Invite doesnt say much about the device launching in it, but it has large ‘X’ on a dark background, and date of 29 May. This date is inline with earlier leaks which we have got.

It is too early to say whether company is launching X21 UD itself in India under a new series ‘X’ or they are going to launch something else in India.

The main talking point of this Vivo X21 UD is the finger print sensor placed under the display which is developed in partnership with US-based Synaptics. And Vivo X21 is also few smartphones in which you can download and install Android P Beta.

When it comes to the specs, the Vivo X21 UD flaunts a 6.28-inch Super AMOLED FD+ display and has 18:9 aspect ratio. Just going with the trend, there’s a notch at the top which has selfie camera and IR fill light, which helps in making a 3D mape of one’s face for the Face Wake 2.0.

Under the hood, it is powered by a Qualcomm Snapdragon 660 octa-core processor along with 6GB of RAM, 128GB onboard storage and Adreno 512 GPU.

When it comes to the photography front, there’s a dual-camera setup of 12-megapixel+5-megapixel at the back and there’s a 12-megapixel snapper up front for selfies and video calling.

Vivo X21 UD houses a 3,200mAh battery with fast-charging onboard support. For connectivity, it has support for WiFi, Bluetooth, GPS, and Micro USB, and when it comes to software front, it runs Android 8.1 Oreo with Funtouch OS 4.0 on top of it.