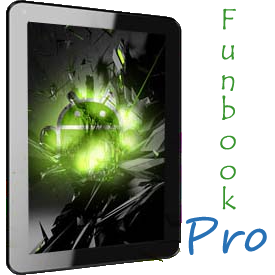 Micromax, well this is the company who is giving tough competition to all companies in India market, they had launched series of Android phone which fits your budget, they had feature phone too.

I think you all should remember Funbook, a ICS tablet from Micromax which was launched last year. I think Funbook was the first tablet budget tablet launched here in India. After that many other companies bring there ICS tablet in price range of Funbook.

But now Micromax is all set to launch an upgradable version of its tablet, Funbook Pro. Well this tablet gets larger display screen and larger screen resolution too on which Funbook has to face criticism as it wont provide good reading experience to users.

Funbook Pro comes with an 10.1 inch display screen which has 1024×600 pixels resolution, it runs on Android 4.0.3 and yes it does come with Google Play so that you can download apps from Google Play. It has 1 GB of RAM and powered with 1.2 Ghz single core Cortex A8 processor and also comes with 400 Dual mali GPU.

It comes with Wi-Fi for connectivity again it misses 3G, but you can use 3G using dongle, It comes pre-loaded with some apps like Adobe Reader, YouTube, ZIP Extractor and so on.

Price range of this Tablet is not known as its not officially announce but we are hoping it will be around 7500 INR, once it get announced we will update price of it. We are hoping that Micromax will launch it next month.