Earlier this month China-based technology company LeEco has announced the second generation of its smartphone’s, the LeEco Le 2 and Le Max 2 which went on sale earlier today in its first flash sale in India and company has received over 6 lakh registrations for this flash and company has said they had successfully sold over 61,000 units of the Le 2 and Le Max 2 in combined sales at Flipkart and Lemall.com which generated a total revenue of Rs. 78 crores. 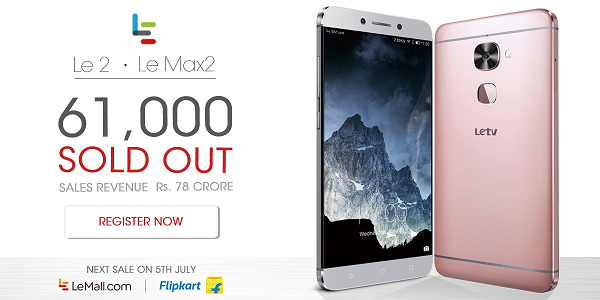 Out of this, company has mainly sold out Le 2 as it’s an affordable smartphone which comes with nice set of specs and features. Next flash will happen on  5th of July and you will still get the free CDLA headphones worth Rs. 1990 with both of the phones, and you will also get 10% cashback and free LeEco membership for first year worth Rs. 4900 with LiveTV, Movies, Music and Cloud Storage.

Just to remind you the specs, LeEco Le 2 flaunts a 5.5-inch full HD display, under the hood, it is powered by Snapdragon 652 octa-core processor along with 3GB of RAM and there is 32GB of internal storage.

Both smartphone’s, the LeEco Le 2, And Le Max 2 runs on Android 6.0 Marshmallow OS wrapped under EUI 5.5