Today Kobo, a Japanese Toronto based company has entered India and launched its eBooks reader in country. Most of you might be already using Kobo on your Android or iOS smartphone or tablets. 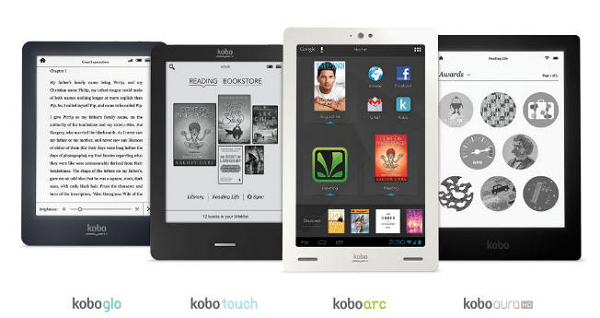 The range of these eBook readers starts from Rs 7,999 and go up to Rs 13,999. The devices can be purchased from Croma, Crossword and WHSmith from today itself.

As per Kobo, it has a catalog of over 4 million eBooks available in 68 different languages, which covers 95% of India’s best selling titles. Earlier this year we had seen Amazon launching its Kindle e-book readers in India.

The Kobo Touch flaunts a 6 inch eInk XGA Pearl touchscreen display with 800×600 pixels screen resolution. It comes with Freescale 508 processor along with 2 GB of internal storage which can be expandable up to 32 GB using microSD. Kobo Touch supports 10 font styles and 24 font sizes. It also supports PDF, JPEG and TIFF file formats. For connectivity, it has Wi-Fi and USB. Kobo claims that this device can last for up to one month on a single full charge. It has been priced at Rs 7,999 but as Diwali pffer it can be purchased for Rs 6,999 till November 3.

Kobo Glo also flaunts a 6 inch diplay screen with XGA Pearl E-Ink touchscreen with full HD screen resolution of 1024×768 pixels. It comes with adjustable ComfortLight technology to enable people to read anytime – day or night, which was first seen on the Kindle Paperwhite. It is powered by 1GHz processor along with 2GB of internal storage which can be expandable up to 32 GB using microSD card. As per battery comes with one month backup if Wi-Fi turned off or up to 70 hours of continuous usage with ComfortLight. It comes with 8 font styles with 24 font sizes, built-in dictionary, library personalization, predictive search, brightness controls, double-tap PDF zoom in, and SimpleTurn page turning. For connectivity it has Wifi and Micro USB. It has been priced Rs 10,999.

Kobo Arc is an 7 inch Android tablet with 1024×600 pixels screen resolution , It runs on Android 4.1.1 Jelly Bean. It comes with the Kobo Reading Life interface for reading eBooks, and as it runs on Android you can access Google Play store on it unlike Amazons Kindle Fire range of Android tablets in which you cant access Google Play. Its been powered by a MediaTek quad-core processor ticking at 1.2GHz along with 1GB of RAM, and  8GB of ROM with an option to expand it up to 32GB via a microSD card. It has been priced Rs 11,but as Diwali offer you can get it for Rs 9,999 till November 3.

Kobo Aura HD is for those who wants full multimedia experience along with reading. As per features, it has a 6.8-inch Pearl E-Ink display with ComfortLight frontlit display screen with 1,440×1080 pixels screen resolution. It comes with a 1GHz processor along with 4GB of internal memory and a microSD card slot. If we talk about battery then Kobo claims that it can last for up to two months if used for 30 minutes every day. It has been priced Rs 13,999.

MakeMyTripe Allow You To Book Bus Tickets Via SMS