Nowadays you will find every second smartphone launched comes with its own OS, like Xiaomi is using MIUI, Meizu using Flyme and like more, most of these OS are made on top of Android OS, and manufacturer modifies them as per their own and their user’s needs. Now as per Counterpoint Market Research reports  Indus OS, the world’s First Regional Operating System, conceptualized, developed and designed in India, has overtaken global giants such as iOS, Windows and Cyanogen to emerge as the 2nd most popular OS in India. 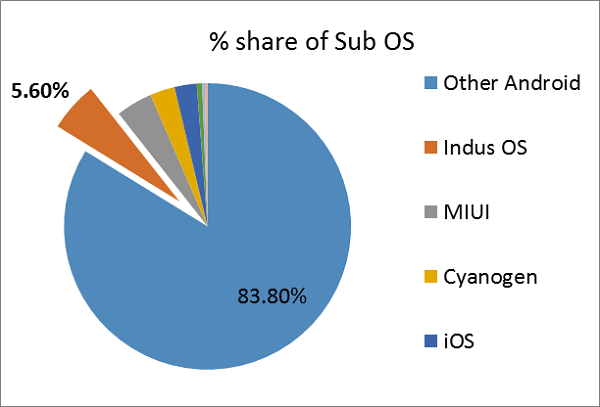 As per Counterpoint Market Research, Q1 FY 2016-17 saw a total of 24.8 million smartphone devices sold in India, of which 1.4 million devices were powered by Indus OS. The indigenous operating system is currently available in 12 Indian languages, adding close to half million OS activations every month, and growing at a whopping 150%; the company expects to double this number within 6 months.

It is well researched that the next 300 million users who will use a smartphone for the first time in the next 3 years, will be native language speakers, and Indus OS is working to create a mobile ecosystem for these users.

Indus OS is currently present across 25 handset models. The Government of India has also been a key partner in Indus OS’ growth story. In December 2015, Indus OS collaborated with the Ministry of Communications and IT’s DeitY (Department of Electronics and IT) to introduce text-to-speech technology in regional languages. Indus OS aims to be the vehicle to distribute regional language technologies, and digitally power Indian masses.

Rakesh Deshmukh, CEO, Indus OS, said “At Indus OS, our aim is to place the power of mobile technology into the hands of the next emerging billion. We have seen an overwhelming response so far – we expect to be on one in every six devices sold in India by 2017, with a total of 100 million customers by 2018.”