Last year we saw Honor View 10 which company has launched to compete with smartphones like OnePlus 6, and Honor was trying to compete to Snapdragon 845 with its flagship in-house processor, the Kirin 970, and up to some extent we saw Kirin giving tough competition, however there were couple of things which we didnt liked on Honor View 10 like a camera bump on it. The company has launched Honor View 20 which comes with 48MP rear snapper, a hole-punch camera and elegant design, but will it be able to stand out in the competition, lets find out together. Nowadays most of the smartphones are coming with glossy back, and Honor View 20 is no exceptional as well, but it takes it to next level, the Sapphire Blue color unit looks very normal at first, but you will see V pattern at the back when light hits from certain angles. 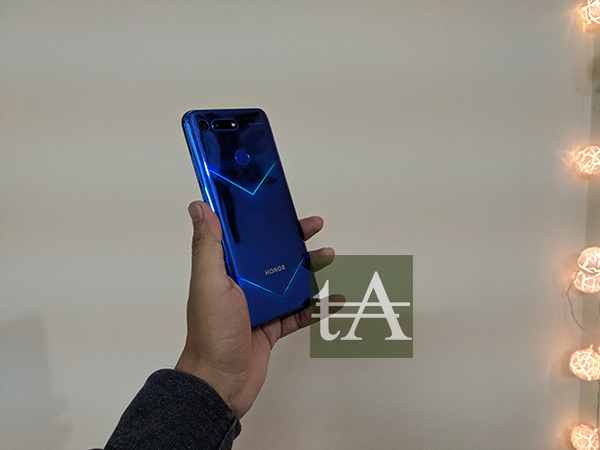 When we are talking about back panel, its worth mentioning that the back do feels slippery in hand, which means either you should use a case or take extra care of the device. The frame of this device is made up of frame which do gives extra protection to the device.

When it comes to connectivity and ports, the on the right side you will find power and sleep button which has some sort of textured finish on it which makes it easy to find without looking at it. 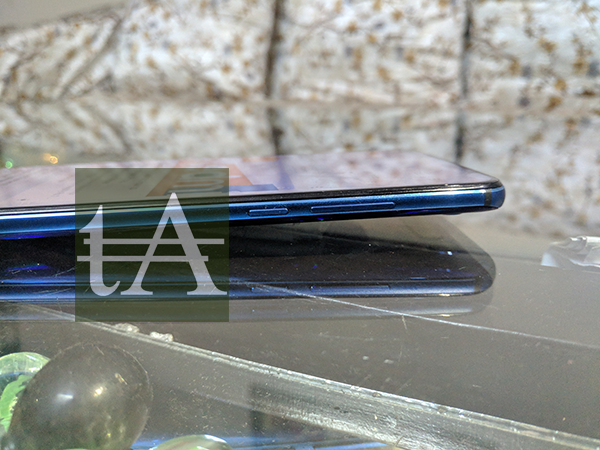 Then you has volume rockers which are slightly higher for 6.4 inch device and you have to shuffle through the device. 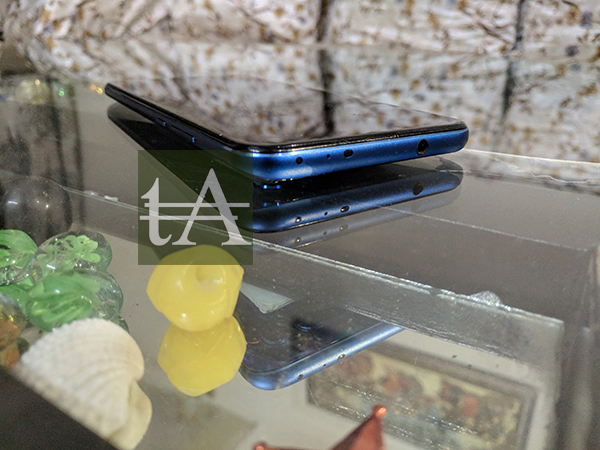 At top you will find, IR blaster and ambient light sensor along with a 3.5mm headphone jack, yes regular audio jack is there. On the left hand side you will find SIM tray, and at bottom you have USB Type-C, microphone and speakers. 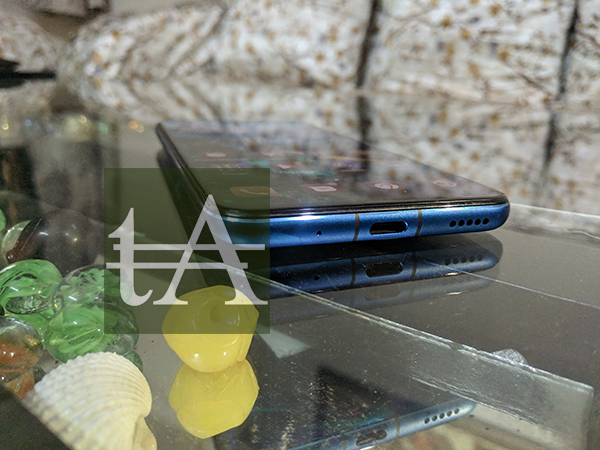 At back you will find a 48MP shooter at the back and there is a TOF (Time of Flash) at the rear along with LED flash and a finger print sensor as well which works flawlessly. 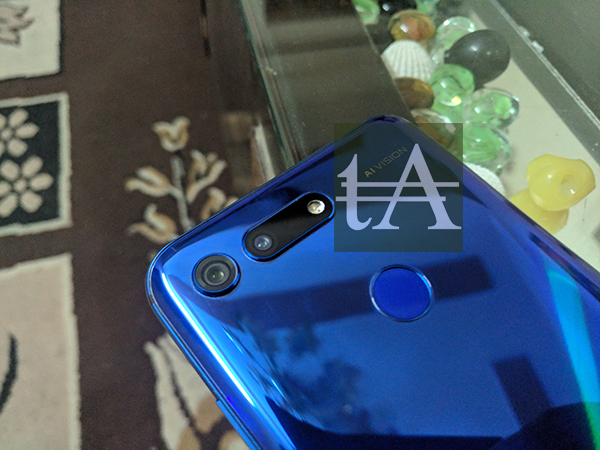 Coming to the front, which is the show stopper here as well, it has an 6.4 inch display which has hole-punch for front facing camera. This is the first of its kind of smartphone launched in India. It eliminates the need of notch as you have selfie camera in the hole-punch and it pushes sensors and ear piece to the frame of device.

Hardware And Specs Of Honor View 20 –

When it comes to under the hood features of Honor View 20, it is powered by 7nm Kirin 980 SoC which is the top of the line processor from the company, it is an octa-core processor and has three types of core which are intelligently used depending upon the tasks. Kirin 980 SoC is the first processor to have ARM Cortex-A76 cores, and you have Mali-G76 GPU for graphics, and dual NPUs (Neural Processing Units). 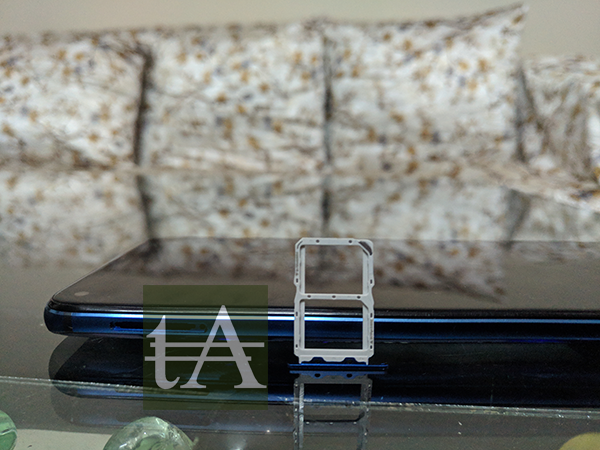 Honor View 20 comes in an option of 6GB of RAM and 128GB of internal storage which cant be expandable, there is an 8GB RAM, 256GB storage option as well.

As told earlier, Honor View 20 comes with 6.4 inch FHD+ display with screen resolution of 1080×2310 pixels, the hole-punch on the display is barely noticeable unlike notch, it sits in the corner of display and wont interfere much while you are watching movies or playing games. 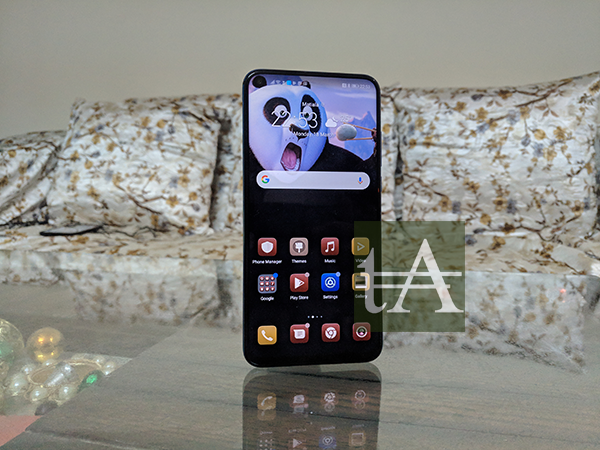 If still you find it annoying, the you can get rid of it from setting. The display is bright and colors look good on it, you can always adjust the color out or color temperature according to your needs.

You can also adjust the screen resolution of the display, either you can manually set it to FHD+ or HD+ or let the device decide according to battery level.

The viewing angles on this device is very nice and sunlight visibility is also superb, we never had issue with the display.

Honor View 20 comes with Magic UI 2.0 which is based on Android Pei v9.0, since we have got this device, we had received couple of updates from the company which is god as many Chinese manufactures don’t care for updates.

Whole UI is customized for hole-punch, and icons are moved to the right. It do comes with couple of pre-loaded apps like HiCare, Health, Honor Club, Party Mode, Camera360, Vigo Video, Facebook, Facebook Messenger, and Netflix. There are couple of things which we like, a Phone Manager which lets you manage your device and its resourced, and it also comes with Digital Balance, which lets you identify how much time you are spending on your smartphone.

Magic UI do have theme supports baked in, which means you can adjust the look of your device according to your need.

Honor View 20 comes with a battery of 4000 mAh which is good for it, in our FHD video loop test, it lasted for 10 hours 8 minutes.

It comes with supercharger in the box which we used to charge the device, and in just 30 minutes, its 45 percent, in an hour its 84 percent and in just 1 hours and 19 minutes, it was full charged.

A fully charged Honor View 20 lasted a full day with around 20 percent battery left while using it throughout the day which involves calling, WhatsApp, PUBG, Asphalt 9, YouTube, WiFi and Bluetooth was on all the time, and yes clicked couple of images with it.

We had seen the performance of Kirin 980 in Huawei Mate 20 Pro, and was expecting the same from this device as well, and we were not disappointed here as well. Kirin 980 along with 6GB of RAM and Magic UI takes care of everything for you.

Apps and games load up quickly with any lag, switching between apps without killing them is not issue. 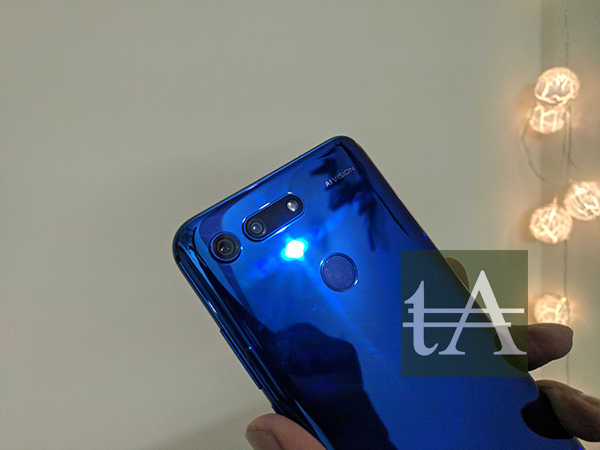 The rear mounted finger print scanner is very fast and works almost every time, we never had issue with it, Honor View 20 uses front camera for Face Unlock and it was fast as well, if lighting condition is accurate then it can unlock screen in no time, but in low lighting condition it do struggles a bit which is normal.

If you like numbers, then here are some benchmark test results

We played games like Asphalt 9, PUBG, GTA San Andreas and Taken, all on high setting and we never faced any lag or frame drop.

Camera is the most talking point of this device, it comes with a 48MP rear snapper with a TOF 3D camera along with it. If you had used any other Honor device then you will find very similar camera app here as well.

Company has added couple of more option here and there on the app like now HDR is a separate mode, not a toggle, apart from Photo and Video, you will get AR Lens, Night, Portrait, Pro, Aperture, Artist, and Panorama modes. 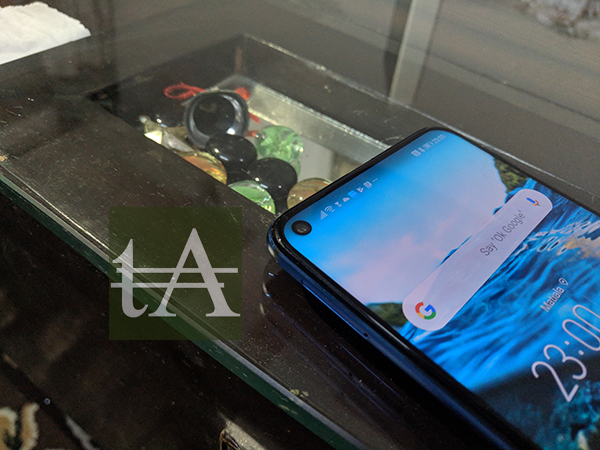 By default, camera is set to take pics in 12MP, you have to go to setting and select 48MP to take full advantage of it. We never had issue with the images taken wit Honor View 20, then contains nice amount of details.

If you want to enhance your images then dont forget to turn on AI mode and then you will see significant difference in images, they will have more details and more contrast, and same goes in low lighting condition as well, AI will make sure you will get more images.

Portrait images are now in fashion, and this device does a good job here to with nice edge to edge detection.

AI of this camera can detect different object or scenes and adjust the setting according to it, like it can detect landscape, face, pet, food or flowers.

Same goes with it 25MP front facing camera as it too has AI and can enhance your selfie with it, here you do not have flash but it can light up the full screen to give you soft flash like experience.

Rear camera can shoot upto 4K, but uses stabilization up to 1080p only, and 4K recording is limited to 10 minutes only, while front facing camera can record up to 1080p. 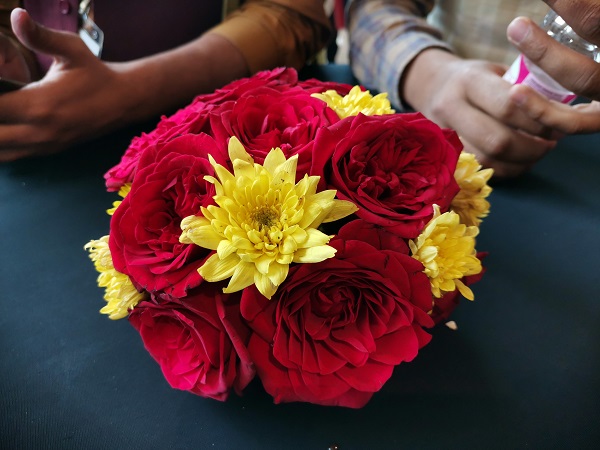 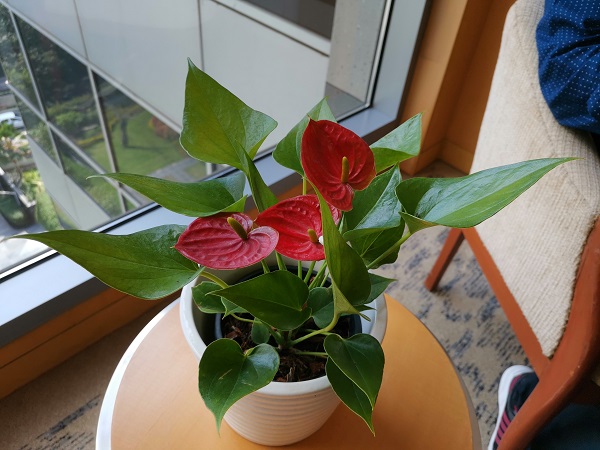 Honor View 20 comes with top notch specs, and beautiful design, it has hole-punch display which does make it stand out in the crowd of notch.

In terms of performance, we don’t have any complaints here, display is elegant, but company needs to work on its UI, camera again has our full votes. Where the slippery back panel adds beauty to the device, we were constantly worried for it as well, because once it slips out of your hand and all beauty goes, company do provides a back case inside the box.

Price at Rs. 37,999, it competes directly with OnePlus 6T which is a tight competition for it, if you love stock OS then OnePlus should be your choice, but if you love beauty, and camera then Honor View 20 should be the one you go with.