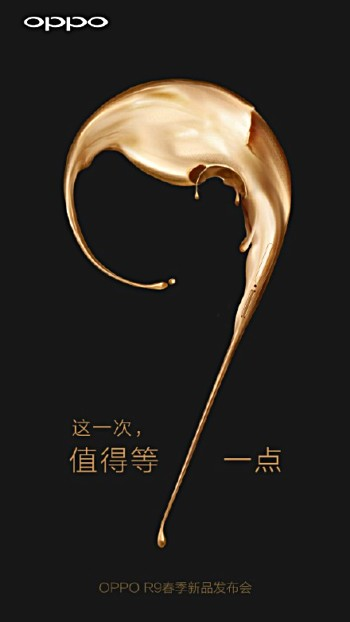 The teaser which company has put up on its Weibo accounts is in Chinse but if you translate it into English, it means “This time, it is worth and other ’9′ point. #OPPO New camera phone #R9.”

Apart from being a camera-centric smartphone, last year we had seen some leaks about this device which suggest it will have 6-inch QHD (1440x2560pixels) display and will be powered by Qualcomm’s latest Snapdragon 820 SoC along with 3GB/4GB of RAM and will have 64GB of onboard storage which can be expandable via Micro SD card.

For photography, it will have 21-megapixel rear snapper with dual LED flash and there will be a 13-megapixel front facing snapper, houses 3,700mAh battery and for connectivity, will supportWi-Fi 802.11ac, Bluetooth and GPS, and when it comes to software, it is expected to run on Android 6.0 Marshmallow OS based ColorOS out-of-the-box.