There is an ongoing battle among smartphone makers to launch a full display smartphone, in this race we have seen smartphones with notch which we had first seen on Apple iPhone X, and then it was followed by other brands, and then we had seen punch hole design as well, but none of them has full edge to edge display, last year Oppo has launched Find X with slider mechanism, but it failed to attract buyers due to its high price, but last year Vivo has launched Vivo NEX in which we had seen pop-up selfie camera which was loved by customer and it was one of the best design smartphone as well, this year Vivo has launched Vivo V15 Pro, again pop-up camera. 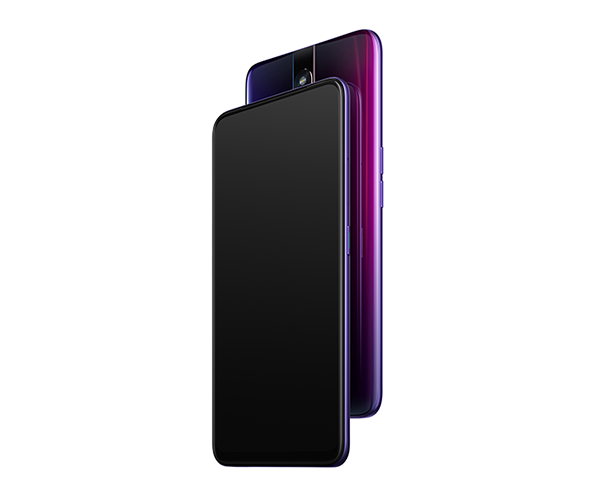 Today Oppo has also launched their first pop-up selfie camera smartphone, the Oppo F1 Pro which is the successor of last year launched Oppo F9 Pro,, and it comes with a 16MP selfie camera which remains hidden until you switch to selfie camera mode.

When it comes to the specs, 6.5-inch Full HD+ display which is edge to edge display, an its back uses a polycarbonate material with glass finish and is offered in gradient finish which attract lots of finger prints.

Under the hood, it is powered by MediaTek Helio P70 SoC along with 6GB of RAM and 64GB storage, at this time, company has launched only one storage variant and said thy could launch more variant if consumer wants it.

When it comes to camera, it has got dual camera setup at the rear which is 48-megapixel primary camera and a 5-megapixel secondary shooter, the primary camera is of Sony IMX586 sensor, the same which we had seen on Honor View 20 and Xiaomi Redmi Note 7 Pro.

The secondary 5MP camera over here is to capture the depth, and not only this, with this dual camera setup, Oppo has added night mode, which uses multi-frame exposure to capture brighter images in low lights with more details.

As told earlier, it has 16-megapixel sensor for selfies. There is a rear mounted finger print sensor, and for connectivity, it supports LTE, VoLTE, WiFi, Bluetooth, and Micro USB. It houses a 4000mAh battery and for software scenario, it runs on Color OS 6 based on Android 9 Pie.

Oppo has priced the F11 Pro at Rs 24,990, and it will be available online via Amazon India, and will go on first sale on March 15, pre-order has already started