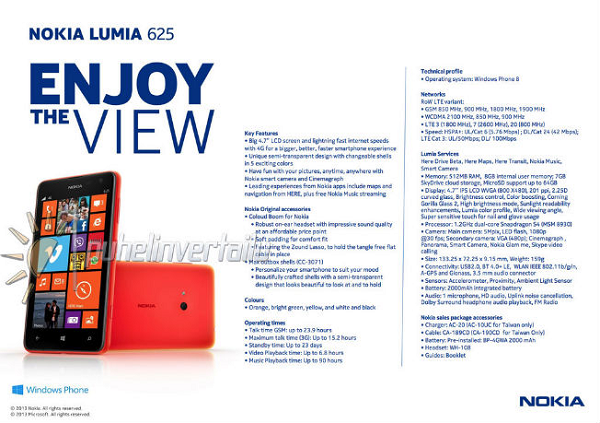 Hours after we reported that Nokia will announce something big today, but now it seems its impossible for Nokia to keep secrete as folks over Puhelinvertailu has successfully got there hands over full spec sheet of alleged Lumia 625 which features 4.7 inch of screen which is largest of all Lumia till now.

Earlier we had seen leak image of Lumia 625 but this time it seems official. However being largest display screen it remains to be mid-range phone and have low pixel density of 201ppi.

Other specs are like it is powered by 1.2 GHz Qualcomm Snapdragon S4 dual-core processor along with 512 MB of RAM, it comes 8 GB of internal memory with expandable option. At back it has 5 MP rear camera and a VGA front facing camera.

Being a mid range phone it comes with some nice features like super sensitivity mode for display, high brightness mode so that you can use it under sunlight and ability to use it with gloves on and it also comes with Bluetooth 4.0

Xiaomi Redmi 1S Priced Rs 5,999, Pre-Registration Opened And Will be...