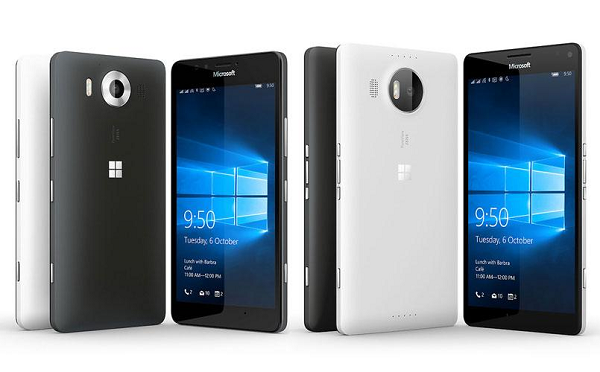 When it comes to specs Microsoft Lumia 950, it flaunts an 5.2-inch WQHD (2560×1440 pixels) AMOLED ClearBlack display with pixel density of 564ppi, screen is protected by Corning Gorilla Glass 3 protection, and at its heart it has got Snapdragon 808 hexa-core processor clocked at 1.8GHz along with 3GB of RAM, it also comes with 32GB internal storage which can be further expandable up to 2TB via microSD card and like always you will also have OneDrive storage.

When it comes to photography, it features an 20-megapixel f/1.9 PureView rear snapper with triple-LED flash, optical image stabilization and also supports 4K video recording, at front there is an 5-megapixel wide angle f/2.4 selfie camera which can record 1080p videos.

For connectivity it supports dual-SIM card slots, 4G LTE support, Wi-Fi802.11 a/b/g/n/ac, Bluetooth 4.1, and USB Type-C port, it houses an 3,000mAh battery which supports charging support and fast charging, company claims that the battery is good enough to offer up to 18 hours of talktime, and up to 12 days on standby mode.

When it comes to Microsoft Lumia 950 XL, and as name suggest its the bigger variant of Lumia 950 and much of the specs remains the same, it flaunts a bigger 5.7-inch WQHD display with massive 518ppi and again protected by Corning Gorilla Glass 4 protection, under the hood it is powered by an 2GHz Snapdragon 810 octa-core processor along with 3GB of RAM, it has houses an bigger 3,340mAh battery to which company claims can give up to 19 hours of talktime and up to 12 days on standby mode.

Oppo A3s With Dual Cameras And Notch Launched In India At...