Last year, Korea based company, LG has announced a series of tablets, LG G-Pad, which came in different versions like 7-inch, 8-inch and 10.1-inch versions. Now company has updated its 10.1-inch variant and launched its successor, the LG G Pad II 10.1 which will be showcased at IFA Berlin which will kick off next week, and company also said this tablet will go on sale next month itself in selected countries of North America, Europe and Asia. 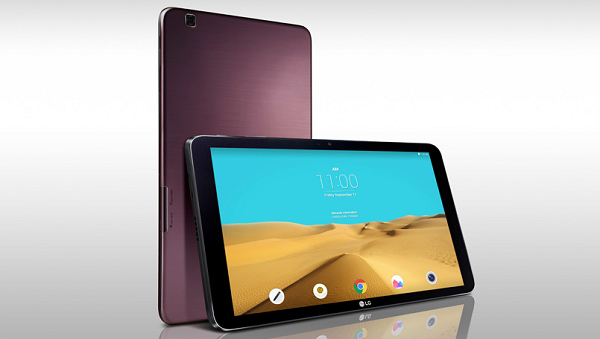 LG G Pad II 10.1 comes with a very thin profile and has only 7.8mm thin body, company also says that this tablet’s bezels are the slimmest bezel among any 10-inch tablet available in the market as of now.

When it comes to specifications, LG G Pad II 10.1 flaunts an 10.1-inch WUXGA display with screen resolution of 1920×1200 pixels which a bit low for 10 inch tablet, under the hood it is powered by an Snapdragon 800 quad-core processor clocked at 2.26GHz, its a bit old processor but still has lots of power and 2GB of RAM will not disappoints you, it also comes with 16GB of internal storage which can be further expandable via a microSD card, company is also providing 100GB of free storage on Microsoft’s OneDrive.

For photography LG G Pad II 10.1 features an 5-megapixel rear camera, 2-megapixel front-facing camera, and has a massive 7,400mAh battery, for connectivity you have all needed options here like Wi-Fi 802.11 a/b/g/n/ac, 4G LTE support, Bluetooth 4.1, and GPS. When it comes to software front, it runs on Android 5.1.1 Lollipop out-of-the-box. LG has pre-loaded Microsoft Office with the tablet.