Today Transsion Holdings owned brand, Infinix has entered Indian smartphone market by announcing two new smartphones in India the Hot 4 Pro and Note 4 which are priced at  Rs 7,499 and Rs 8,999 respectively. Both phones will be available exclusively via Flipkart, Hot 4 Pro will be available from August 3 11:59PM while sale for Note 4 will take place on August 3 at 12:00PM. 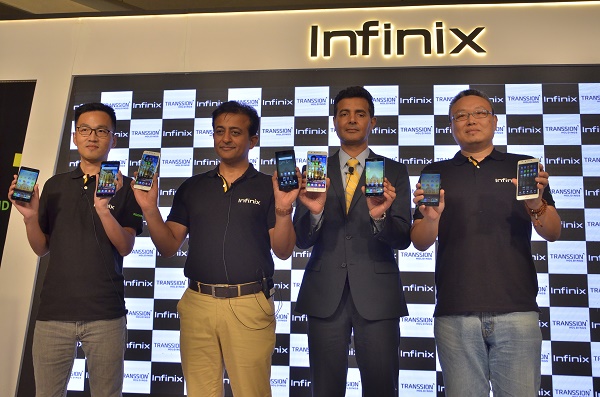 When it comes to specs, Infinix Hot Pro 4 flaunts a 5.5-inch HD (720p) display, under its hood, it is powered by a MediaTek MT6737 quad-core processor ticking at 1.3GHz along with 3GB of RAM and has 16GB of onboard storage which can be further expandable up to 128GB via a microSD card.

For connectivity options, it supports dual-SIM support, 4G LTE with VoLTE support, Bluetooth 4.1, Wi-Fi and Micro USB, it houses a 4,000mAh battery which supports fo the quick charge.On the software front, the Hot 4 Pro runs on Android 6.0 Marshmallow with XOS layered on top.

When it comes to the software front, the Infinix Hot 4 Pro runs on Android 6.0 Marshmallow which is wrapped under companies own XOS layered on top of it.

On the other hand, Infinix Note 4 flaunts a bigger 5.7-inch full HD (1080p) display screen with 2.5D curved glass on top. Under the hood, it is powered by a MediaTek MT6753 octa-core processor ticking at 1.3GHz, along with 3GB of RAM and has 32GB internal storage which can be further expandable.

When it comes to the photography front, the Infinix Note 4 features a 13-megapixel rear snapper with PDAF, dual-LED flash, and at the front, it houses an 8-megapixel camera with customizable soft LED flash. It houses a bigger 4,300mAh battery along with XCharge fast charging support, company says that Xcharge offers 75 percent charge in just 60 minutes and five minutes of charge can give two hours of talktime.

When it comes to the software front, the Infinix Note 4 runs on Android 6.0 Marshmallow which is wrapped under companies own XOS layered on top of it.