In the ongoing Consumer Electronic Show 2015 all companies are showcasing their latest innovations, some has launched smartphone with latest chipset, some smartphone’s features all new UI or Androir OS, but there is a company, Saygus which has launched a smartphone which is going to give a run to most of the external hard drive. Saygus V2 comes with the support of up to 320GB of storage, yes its 320GB which you will find on external hard drives. 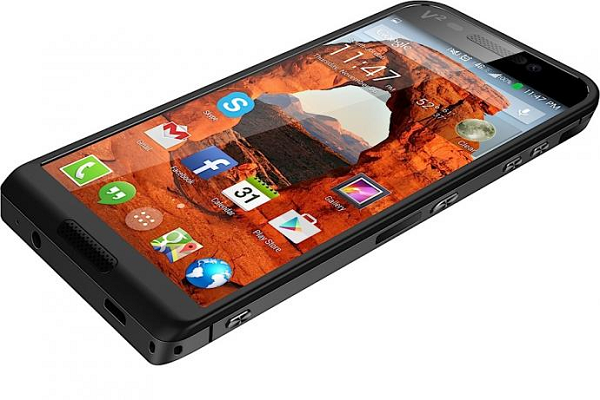 If you are loves to store lots of data like music, movies, or we can say lots of movies then its the device which you can look for. Saygus V2 includes 64GB of internal storage with support of two microSD card slots which support memory expansion up to 128GB each (64+128+128=320), this is the highest number of storage which you can get in a smartphone as of now.

Apart from offering such a huge memory support in this device, Saygus is also offering one of the most talked feature in Android smartphone’s which is root access, which means you will get complete control over the device and you can install any apps or make changes in it, however company didnt revealed whether they will support or not if something goes wrong with device while installing root access apps or while playing with the device.

If we talk about the specs then Saygus V2 flaunts a 5-inch FHD display screen, under the hood it is powered by a Snapdragon 801 quad-core processor clocked at 2.5 GHz along with 3GB of RAM, as per photography front it features a massive 21MP of rear snapper with dual LED flash and a 13MP selfie snapper at front, in terms of software it runs on Android 4.4.4 KitKat.

It also features some additional features like Fingerprint scanner, Wireless Qi charging options and Harmon Kardon speakers which gives takes your entertainment to next level.

Clearly Saygus V2 has set a new benchmark for all other major brands, company hasnt announced any pricing details as of now but device is likely to be launch in the US this spring.

You can view our full coverage of all Consumer Electronic Show 2015 related news here at CES 2015 page.