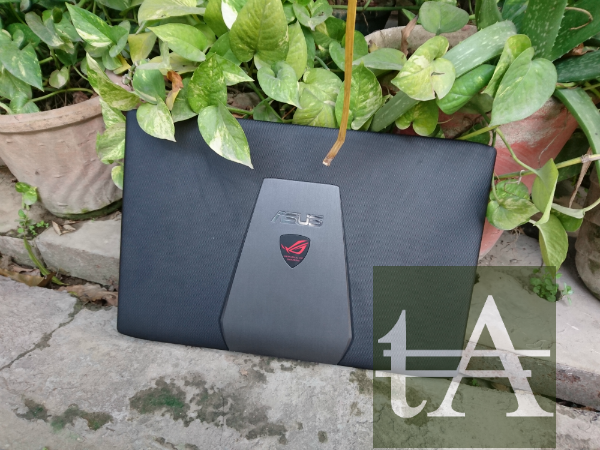 We have been using this laptop from past couple of weeks, we did tried to play some high level games like GTA V, Need For Speed Rivals and couple of more on and we can say if its not the best in its price category but its worth looking at it if you are buying a gaming laptop.

When it comes to build and design then if I can recall correctly then its the first ROG laptop from company which is fully made up of plastic, yeah company has used good quality plastic but everyone loves aluminum, and when its available in other products. 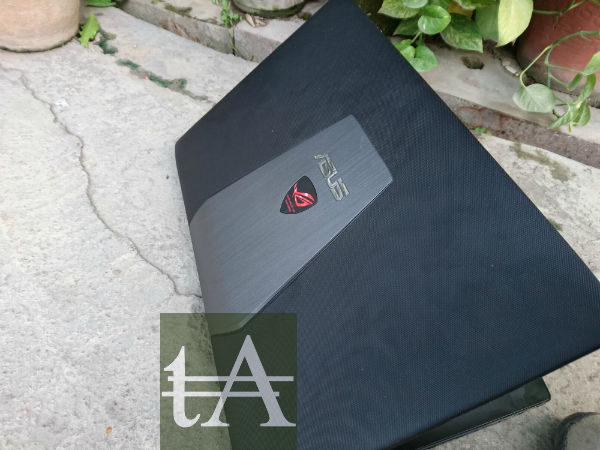 On the other side you will find 15.6-inch screen full HD display panel, a web cam for your video calling and Asus logo which is placed at the bottom of the screen.

The other half of this device is also made up of hard plastic, it has nice keyboard which provide good feedback, around keyboard you will find glossy finish which do looks good but also attract lots of finger prints and smudges.

Just above keyboard you have your two speakers which are quite loud and you can easily enjoy songs with it.

Below keyboard, you will find your trackpad with red boarder line which is the signature of Asus ROG series, trackpad is big enough so that you can do your task, between if you love playing games then you might not use it ever. 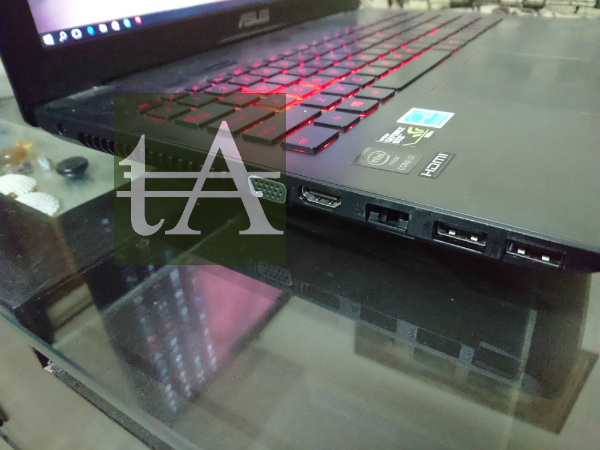 This laptop is quite thin, just 32.4mm, which surely not the thinnest but it do its job done and doesn’t feel bulky, on left side you will find the main heat dispersing grill, one VGA port, one HDMI, LAN and two USB 3.0 ports. 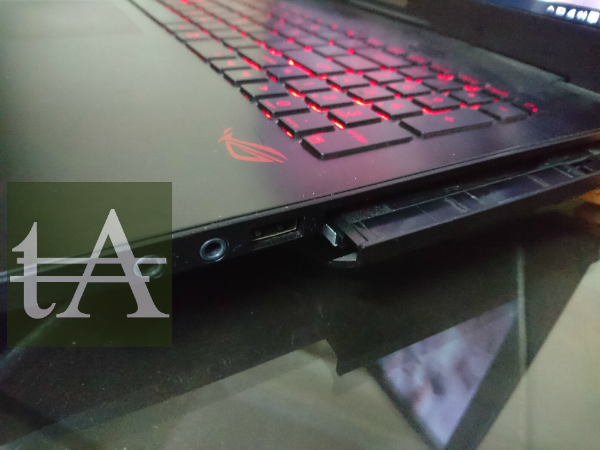 On the right side you will find one USB 2.0 port and two 3.5 mm jacks for headphones and external microphone respectively, and an optical drive. At front you have SD card reader.

When it comes to under the hood features, the review unit shipped to us has got Intel Core i7 4720HQ 2.6 GHz ~ 3.6 GHz Processor along with 8GB of DDR3 RAM, graphics are being handle by NVIDIA GeForce GTX 950M with 2GB DDR3 VRAM. 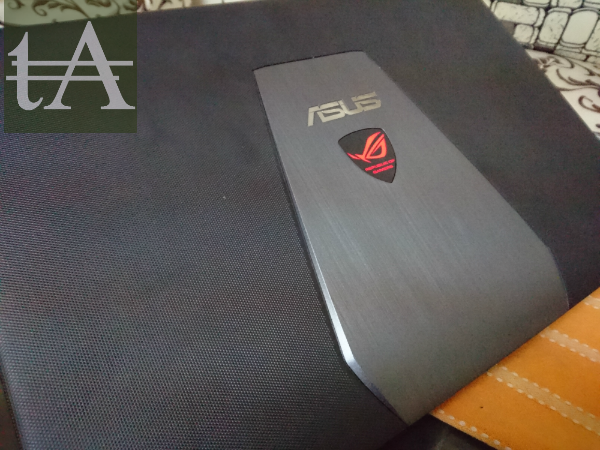 It has got 1TB HDD and do have option for SSD, there is an optical drive, and an 3 in 1 card reader, for connectivity it has WiFi, Bluetooth, HDMI, and Ethernet.

Asus ROG GL552 comes with Windows 8.1 but as Microsoft has provided free update, and when we got our review unit, its already updated to Windows 10, company has made some tweaks like they had changed boot screen, you will find some gaming related apps pre-installed which will enhance your gaming experience.

It comes with Asus Gaming Center which is quite useful which allows you to tweak with gaming profile, display, audio profile and and much more.

Keyboard on is very good, it has long enough key travel, soft and tactile feedback, and the thing which every gamer wants is easily recognizable WASD keys, typing experience on this keyboard is nice, but you might be playing games on it most of the time and for that, keyboard is nice. Keyboard supports LED backlight which is does offer several brightness levels. 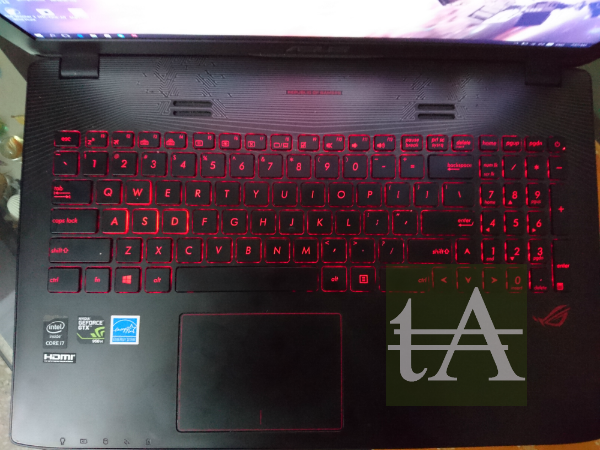 On the other hand, touchpad is big disappointment for us here, its responsive but its hard to press left or right button, but for games you might never use it so you wont mind it but if you do normal job without mouse then it will take a long time to get used to it.

ASUS ROG GL552 uses 15.6 FHD Samsung display panel with pixel density of 141ppi, its very bright, colors looks very natural and viewing angles are also good. Overall color temperature looks nice, black seems deep black and overall performance of screen is nice, but due to screen flickering, it might not be suitable for those who love like spend long hours on it. 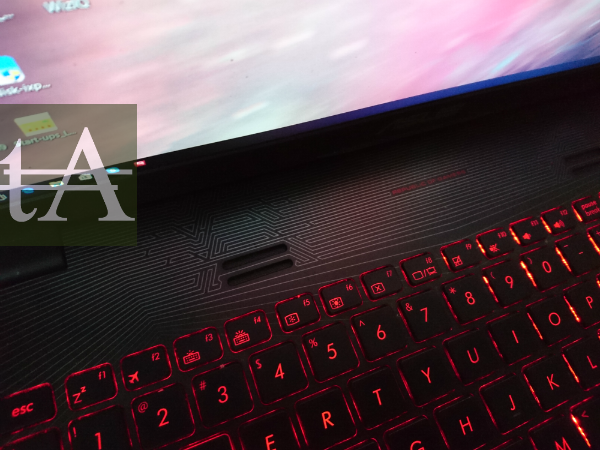 Just above your keyboard you have two speakers which are loud enough for normal usage, we tested different audio files and the effects from those speakers are nice and you wont be disappointed with it, dont forget while playing most of the game you might be using headphone’s.

As told earlier, our review unit has got quad core Intel Core i7 4720HQ, and to check its performance we did some stress test, in normal stage device temperature was hovering around 28C-30C, when we did normal stress test its temperature went up to 42C-44C which is nice and nothing to worry here.

Then to take it further, we put full load on CPU and then its temperature went up to 75C-80C which is again normal and nothing to worry here as well.

While putting stress on GPU, we found that its temperature roses to 65C which is again normal, but one thing which we noted here is that company has throttled CPU, you wont find any difference in daily usage but we noticed this so thought to share with you.

What game we played, we played Need For Speed Rivals, Mortal Kombat X, Battlefield Hardline, GTA V and Tomb Raider, while playing this game on high setting and frame rate where on acceptable limits.

Asus GL 552 comes with 4-cell battery with a capacity of 3200 mAh, this is the department which disappointed us, with high end CPU and FHD display, this battery seems low. 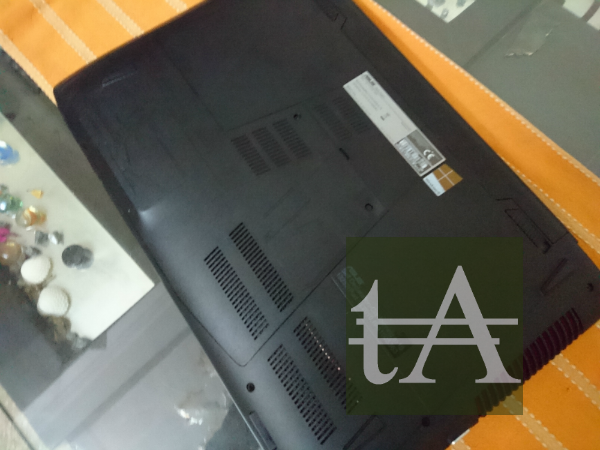 On full brightness, we played HD video and it lasted for around 3 hours only, and while doing web browsing, it lasted for 3 hours 43 minutes which is again low, yes you have power saving mode option which you can use to extend its battery life.

This device does look like and ROG device but doesnt give the feeling of being an ROG if we compare to what we had used earlier. Company has used plastic all around the device, just to cut the cost of the device, and it weighs 2.6Kg which is bit heavier than its competitors, the touchpad is not very impressive and its just Okay for us.

However, the screen of this device is one of the best you can get at this price, speakers are also good for the price you are paying. But the GTX 950M 2GB DDR3 is much like a multimedia card not powerhouse gaming card, yes it can handle much of the games but when you put lots of load then it might give up.

Overall we can say if you love to ROG series and like to play games but dont want to spend money that much then this can be the device for you.