Earlier this week Yu Yureka went on sale for the first on Amazon India and went out of stock from the website but also turned to be a big blunder for the website. If you failed to get it for the first time then you can try your luck another time as next sale is about to happen on January 22 and registration for the same is now open on Amazon India, if you are interested in this smartphone then you can register yourself from HERE. 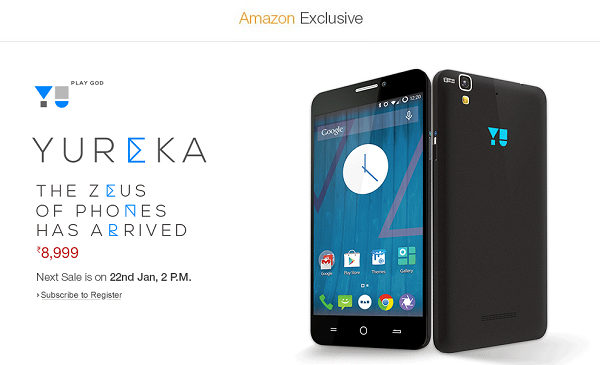 The sale will happen on January 22 at 2 PM, company has also announced that those users who failed to buy YU Yureka for the first time will be registered for second sale automatically.

On first sale Yu has put 10,000 units for sale where around 3 Lacs users has registered for it and at the time of sale users has faced lots of glitches like users has reported that at 2PM site has crashed, those who were able to add phone to cart and when they reached payment page phone disappeared from their cart, and some users reported that website showed the phone’s price to be Rs 12,499 instead of the Rs 8,999.

Just to remind you the specs of Yu Yureka, it flaunts a 5.5-inch HD display screen of 720p with pixel density of 267ppi which is bit a low if we consider such a big display screen device which is protected by Gorilla Glass 3, under the hood it is powered by a 64-bit 1.5GHz Snapdragon 615 octa-core processor along with Adreno 405 GPU and 2GB of RAM, it comes with a 16GB internal storage which can be expandable up to 32GB via microSD card.

If we talk about photography front, then YU Yureka features a 13-megapixel rear camera with Sony Xmor sensor, it also features time-lapse mode, and support for slow motion video recording at 60fps and can record full HD videos @ 30fps, at front it has a 5-megapixel snapper as well, as per battery it comes with a 2,500mAh battery, to which company claims can survive up to seven hours on LTE, and up to 210 hours on standby mode, it we talk about connectivity then it has dual-SIM card support, LTE support, Wi-Fi, GPS, Micro USB and Bluetooth and as per software is concern it runs on Cyanogen OS 11 which is based on Android KitKat 4.4.4, company has also said that it will receive Cyanogen OS 12 based Android Lollipop update very soon.