Today Samsung has expanded their affordable smartphone’s portfolio in India by launching a new smartphone, the Samsung Galaxy J3 which is launched at the price tag of Rs. 8,990 and will be exclusively available on Snapdeal. One of the talking points of this device is its S Bike Mode which is specially made to help bikers so that they can concentrate on roads while notification and calls will be handled by the smartphone using this mode. 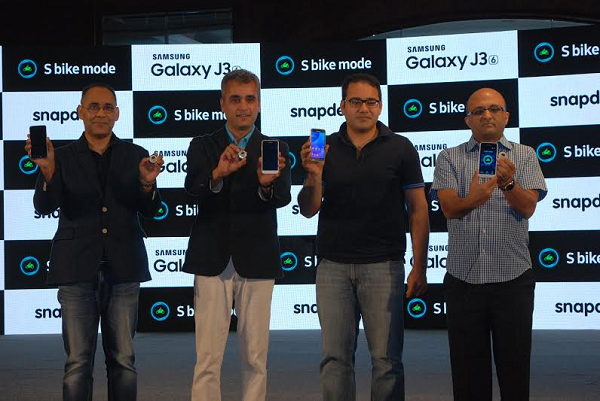 Buys will get an NFC tag with this smartphone which they need to stick on their bikes, and then whenever you are going to ride on your bike, you just need to tap your phone on that tag to activate S Bike Mode.

When phone will be on Bike Mode, the caller will get a pre-recorded message that person is driving, and on the press of 1, you will get a call notification. It also supports some gesture controls.

When it comes to specs and features, Samsung Galaxy J3 (2016) looks very similar to Galaxy On5, it has got a 5-inch HD (1280×720 pixels) Super AMOLED display, under the hood it is powered by 1.5GHz quad-core processor along with 1.5GB of RAM and also comes with 8GB internal storage which can be further expanded via a microSD card.

When it comes to the photography front, the Galaxy J3 (2016) has got a 8-megapixel rear camera with f/2.2 aperture and LED flash, at front you will find a 5-megapixel selfie camera, it houses a 2,600mAh battery that Samsung claims is good enough for up to 22 hours of talktime and up to 14.5 days on standby mode.