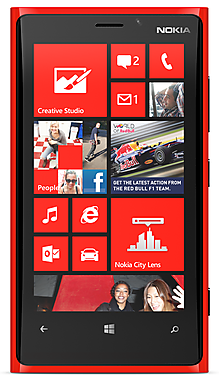 In an event Nokia has introduced Lumia 920 phone which runs on latest Windows Phone 8 OS, Nokia is calling it as worlds most innovative smartphone, let see does it.

Lumia 920 ios powered by 1.5 GHz Qualcomm Snapdragon S4 dual core processor. It has 1 GB of RAM, it comes with onboard 32 GB and free 7 GB cloud storage on SkyDrive. It has 4.5 inch HD display with resolution of 1280×768 pixels with PureMotion HD and ClearBlack technologies which improves brightness in sunlight, provide video clarity. It has Gorilla Glass so its free from Scratch too. Nokia has introduced super touch sensitive screen which means you can use it even through your gloves on.

Nokia Lumia 920 comes with PureView camera, unlike PureView 808 it doesn’t had 41 MP camera but it has got 8.7 MP camera, but it has advance optical image stabilizing technology and Carl Zeiss optics, it can shot full HD videos at 1080p. Nokia say that it improves low-light photos upto 10 times without using any flash. And it also stabilize blur videos.

Nokia comes with 2,000 mAh battery which fully support Qi standard wireless charging technology, which allows you to charge phone wirelessly. Nokia has added lots of apps in Lumia 920 Nokia Maps, City Lens and much more. It comes in Yellow, Red, Grey, White and Black, Nokia is planning to launch this phone by the end of this year. Price of this phone is not yet revealed.