From a long time we are getting lots of news about the second generation Motorola’s Moto E, Motorola has launched second generation of Moto G and Moto X last year and everyone is awaiting for the next version of this affordable smartphone. Earlier leaks suggested that Motorola could launch Moto E (2n Gen) in upcoming Mobile World Congress MWC 2015, but this yet-to-be announce smartphone is already listed on one of the biggest online retail store. 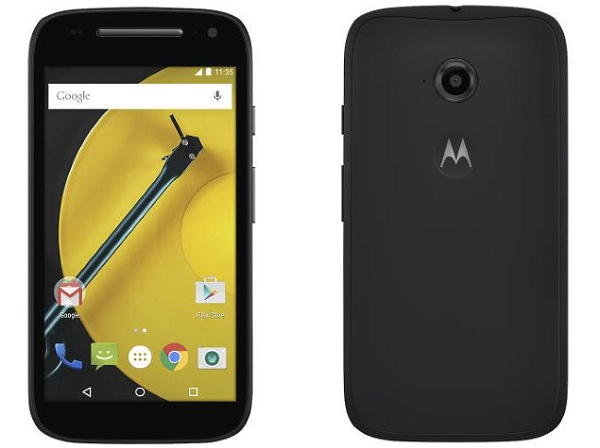 BestBuy has listed Moto E 4G’s Sprint  variant with ‘coming soon’ tag, spilling the beans ahead of the official launch. As its been listed on third party website so we cannot guarantee upon specs and price but it do gives idea about it. On the page, BestBuy has listed this device with the price tag of $99.99, which makes its roughly Rs. 6,000 for the unlocked version.

The images used on website is also in line up of the leaked which we had seen earlier. Website also mention that Moto E 4G will be the first Motorola’s non-nexus device to run Android 5.0 Lollipop out-of-the-box.

If we talk about the listed specs then the Moto E 4G will feature an 4.5-inch qHD IPS display screen with screen resolution of 540×960 pixels, under the hood it will be powered 1.2GHz Qualcomm SoC with 1GB of RAM and 8GB inbuilt storage, microSD card support, will have 5-megapixel primary camera, WiFi, Bluetooth, 3G, and 4G connectivity support.

Its not the official listing and there could be some changes in the final variant which we might see very soon, till then all such leaks must be taken with a pinch of salt.