India’s leading kids tablet maker, the Eddy in partnership with Cartoon Network Enterprises launched the world’s first Creativity Tablet for children in India, this creative tablet comes comes pre-loaded with hundreds of activities, apps and videos designed to nurture creativity in children. Eddy and CNE also announced the launch of Ben 10 tablets in India, which is designed to provide hours of learning and entertainment to kids. Ben 10 is an animated action series, which is became a popular phenomenon among kids all around the globe and among students Ben 10 does not need any kind of introduction. 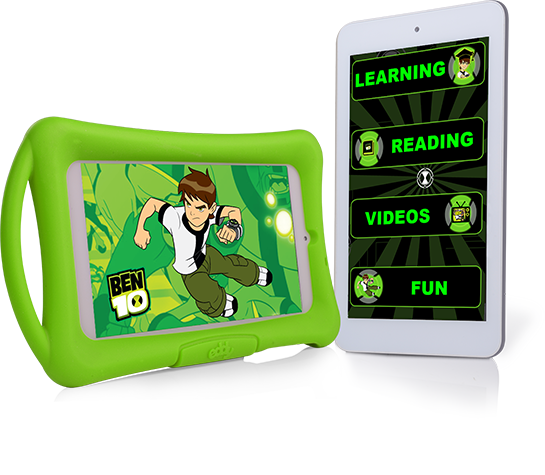 If we talk about specs then Eddy Tablet comes with a 7inch display screen that is impact resistant and scratch-proof, screen is also UV-ray protective to safeguard kids eyes, under the hood it is powered by  Intel Z2520 processor, 1GB RAM & 16GB extendable memory, 2MP front & back camera, runs on Android 4.2.2 which wrapped under Athena OS. It comes with a drop-safe food grade silicone bumper. UV-ray protective screen, safer for eyes.

The Creativity Tablet by Eddy features content from Cartoon Network and POGO that will help children discover their interests and unleash their creative streak. The tablet carries more than 180 activities from the very popular kids’ show M.A.D (Music, Art and Dance).

The Creativity tablet comes pre-loaded with hundreds of art and craft activities, music and dance videos, books and meticulously selected games. The tablet features more than 30 pre-installed role-playing games that let children explore their interests and passions, by playing the role of an engineer or a fashion designer, a chef or a doctor, a film-maker or a photographer. Parents can also download new apps from the over 50,000 educational apps available at Google Play Store.

The Cartoon Network Ben 10 tablet by Eddy combines 10 features in one gadget – including a library, a movie theater, a computer, a personal tutor, a camera, a musical instrument, a gaming console, an art studio, a planetarium and a dictionary. The tablet also comes pre-loaded with more than 1,000 minutes of Ben 10 content, thousands of books and world’s best learning games.

Mr. Bharat Gulia, co-founder of Eddy said, “We build technology for young superstars. In every child there could be a reading superstar, a creativity superstar, a tech superstar, a math superstar or some other inherent talent. Our tablets provide excellent and fun content to bring out and nurture the superstar that lies in every child. Instead of spending thousands of rupees on toys, video games and other merchandise, parents can gift their kids one of these tablets that not only provide unlimited learning and entertainment, but are also much safer compared to any other tablet.”

Siddharth Jain, Managing Director, South Asia, Turner International India Pvt. Ltd. said, “Through Cartoon Network Enterprises, we have always aimed to extend the traditional notions of licensing and merchandising. The Creativity and Ben 10 tablets will not only entertain kids with games and videos but will also provide an impetus to learning new skills and garner knowledge in a fun and familiar tech-based environment.”

Mr. Amit Gupta Director, Business Development, Intel South Asia said, ” We live in an era where technology is an integral part of our children’s lives and when use Thed ef Eddy ficiently and effectively, technology can truly enhance the child’s development process. tablets powered b powy the Intel® AtomTM processor combine an ideal balance of performance and battery life coupled with strong learning content to provide an innovative and exciting solution for kids.”

GoPaisa.Com Review; Is It Worth Of Use