We have seen many gaming laptops from many grands which has got top of the line specs and hardware but when laptops comes with high end specs, they become bulky and heavy, last year Asus made news with its ASUS ROG Zephyrus, which has got slim profile but some unconventional design, but company made it right with ASUS ROG Zephyrus M (GM501) this year which we have been using from past 4 weeks and this is something I really enjoyed while using it. 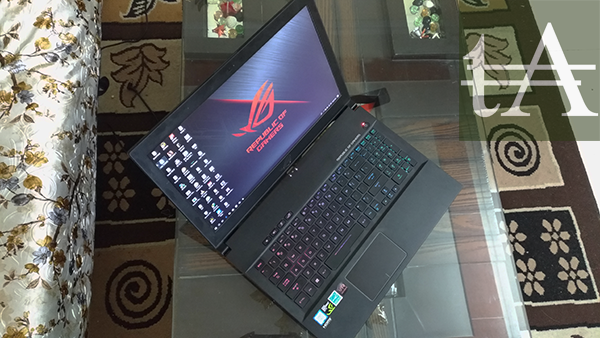 Asus has launched this high end gaming laptop with some improvements which was missing in last generation laptop like better display, and better hatch mechanism and so on.

Just like last years, this one has too got thin profile with same but improved hatch design language. Here too you will find it is made from brushed aluminum in a lovely color Asus calls Black Titanium. 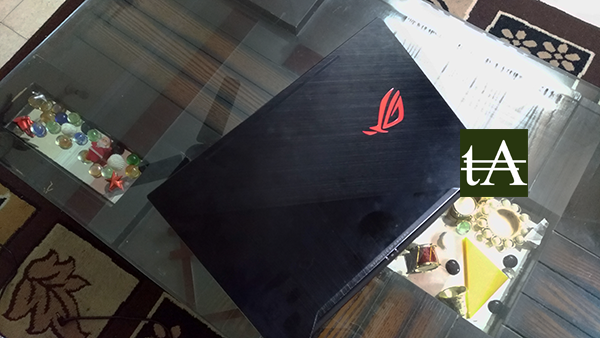 Just like we had seen on last gen, here you will find lid has two distinguishable panels, one has vertical striations while the other has horizontal lines, which kind of gives dual tone look to the laptop. 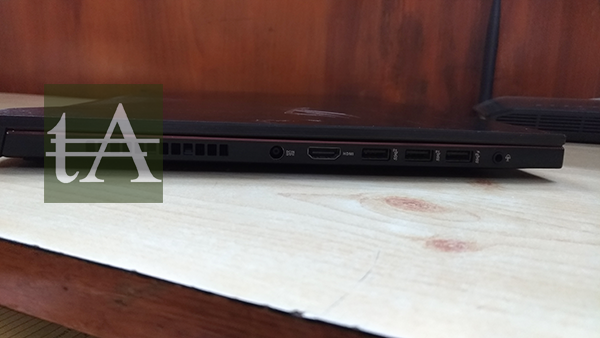 On the left side of the lid, you will find a ROG logo which glows when laptop is turned on, which is surely draws the eyes. There is also a line which runs diagonally to the surface.

Once you move to the bottom of the lid, you will find Republic Of Gamers printed and status lights, and then you will notice vents pooping out. 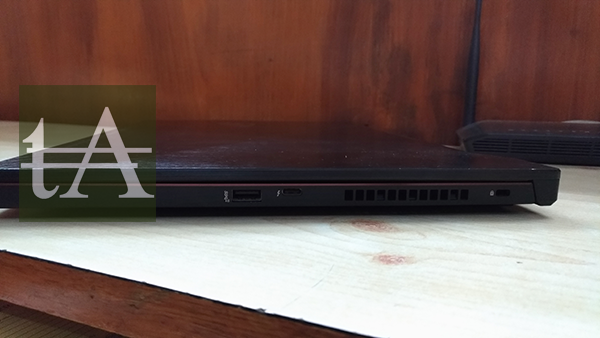 When you open the ASUS ROG Zephyrus M (GM501), it revels its rear-exhaust panel which kind of glow in red and gives extra cool look to it. And actually its only when you open the lid, you will notice some magic, you will find vents coming out of nowhere.

This hatch pushes the laptop bit up and make it recline a bit, which makes the perfect angle for keyboard and its kind of sweet if your work required long typing and at the same time makes air flow easy and better for the machine. 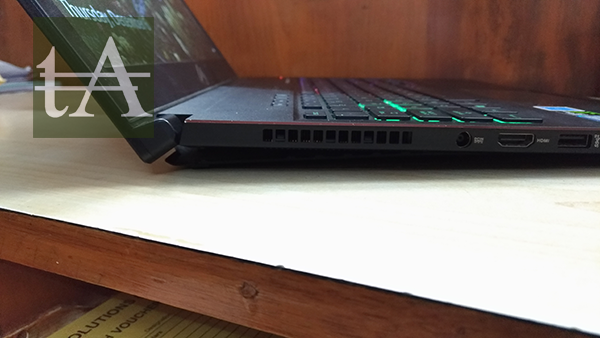 And at the same time it make air flow much better and keep your laptop cool. I rarely found any flow in the design of this laptop. So the overall build and design is one of the best which you can get in a laptop.

When it comes to connectivity and port then, Asus has made improvements here too, now you have four USB 3.1 gen 2, three on left side and one on the right side.

Then you have a HDMI port on left side as well and on the left side you have a Thunderbolt port. There is only singe port for audio on the left side, I was expecting separate ports for mic and headphone. On the both side, you will find vents which makes air flow more easier. 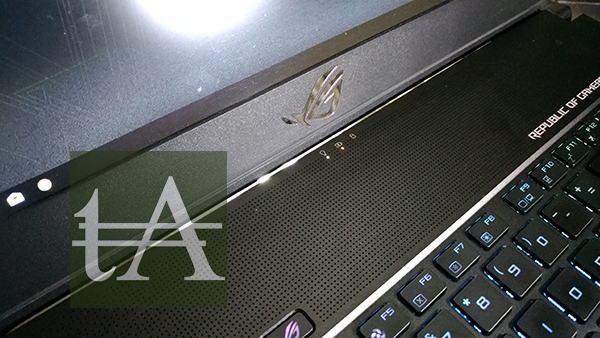 In terms of storage, it comes with 512GB SSD, which helps you in enhancing boot time and performance of the machine, and then you have 1TB HDD.

ASUS ROG Zephyrus M (GM501) comes with Windows 10 Pro 64Bit, like any other ROG series, laptop, here too you will get couple of bundle apps from Asus, and main of the is Gaming Center which not only allows you to have access to important components but it also allows you to view the usage of RAM or CPU, or their temperature. 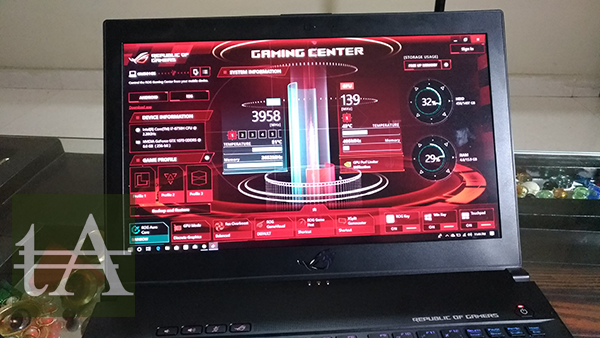 And then at the bottom of it, you have access to other apps like Aura which allows you to tweak with keyboard, Gamefirst V, GPU Mode in which you can choose between Optimus or G-Sync.

And then you have Fan modes available in which you can choose the speed of Fan according to your needs.

Keyboard on ASUS ROG Zephyrus M (GM501) has been improved too from GX501, now in this keyboard you can make long typing. It comes with full RGB backlit which do look cool at many points, specially if you are in little darker room. 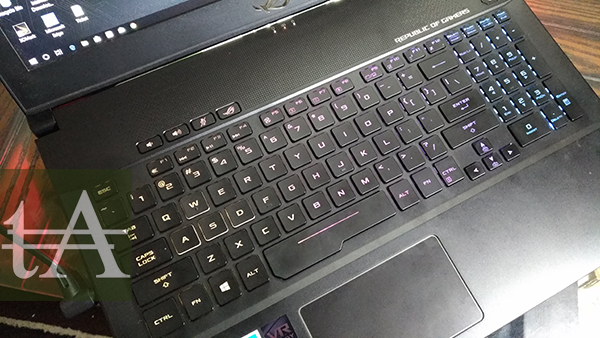 It has key travel of 1.7mm which does provide good experience and as we had already told you that this keyboard gets a bit of tilt when you open screen and it provides good angle to type. 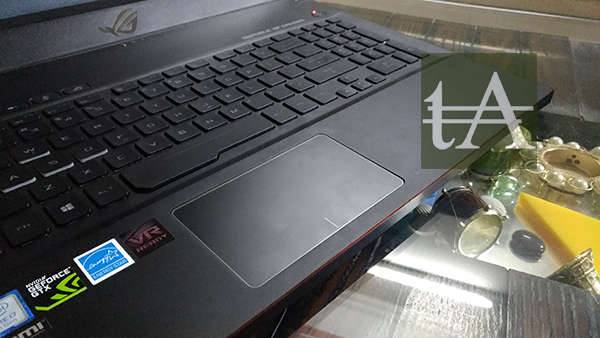 You must praise the four keys available of adjust the volume, turn off the microphone and open the Gaming Center, and then you have full Fn keys supports which allows you to have access to important features. 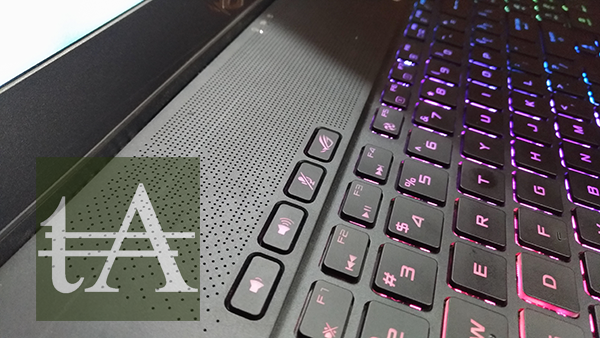 Trackpad on the other hand comes with mix bag of feelings. Asus has implemented ClickPad which is like it has nice size for a 15 inch laptop, and it do supports gestures. But clicking with it is sometime creates noise.

ASUS ROG Zephyrus M (GM501) comes with an 15.6 inch full HD display, which can be little higher here like 2K or 4K. But display is one of the strongest point of this machine as its display supports 144 Hz refresh rate, if you play games then you already know what it means. 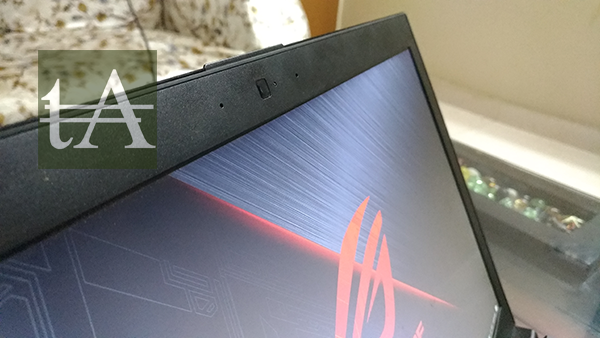 Such a high refresh rate and plus the combination of G-Sync makes this display stand out in crowd.

The color accuracy over here is good and it supports nice viewing angles, it supports wider colour gamut. The 144-Hz panel covers 93% of the sRGB color space and 60% of the AdobeRGB color space, which is ore than enough for gamers.

If you put load on ASUS ROG Zephyrus M (GM501), then you will be able to hear fans kicking out to their max limit and it become noisy as well. Even while playing games or doing any other heavy task, I was able to hear fans brusting out and not only this, the area just above keyboard become hot as well. However once fan runs on there max limit, it become normal in just few minutes. I was able to notice temperature going up to 48 Celsius which is still manageable.

Speakers on this machine does the great job, Asus has managed to put some good quality speakers in it, if you love to listen music then you will find it a very balanced speaker and it is loud enough to make sure you dont need any other speaker.

Battery in this machine sucks, if I was not able to pass 2 hours on max brightness, however the GPU is also not very power friendly.

Updating hardware on ASUS ROG Zephyrus M (GM501) seems limited at first glance but  once you remove the hatch which is held ion place with four screws then you will get access to cooling fans, now you have to remove some more screws which anyone can do. Once done you will have access to two RAM slots via the wireless module and battery to the storage devices (1x M.2 & 1x 2.5-inch).

Performance on this laptop seems not to be an issue, it can handle almost an y task which you put on it. We used this laptop for around 1 month and played games like Far Cry 5, Battlefield, NFS Payback and so on. We also did 4K video editing and RAW image editing on Premiere Pro and Lightroom respectively, and all went fine without any issue. The hexa-core CPU over here handles the task like it should do. But yes, under heavy task, this laptop do gets hotter.

At a time we were having 24 tabs open in Google Chrome and editing a video on Premiere Pro, it showed no sign of lag or whatsoever.

If you love numbers then here are some benchmark test results –

These numbers clearly shows how powerful this machine is and what it can do without any issue.

The overall thought on ASUS ROG Zephyrus M (GM501) is on the positive side, it comes with top specs which you can get at this price tag. It follows what GX501 has started but GM501 check all the boxes what were missing in GX501. Build quality is one of the best its class, we have no complaint when it comes to build and design, its a gaming laptop and its a solid device but in lightweight.

The display with 144Hz refresh rate make it a cherry on top for gamers, and then you have G-Sync support as well. However, battery life on this machine is not up to the mark. Hexa core processor make sure you have top-notch performance always GPU is also there to support all games and it also do have support for VR.