Motorola is expected to launch its latest version of Moto X, which is the third variant and it could be launched in September but it seems we dont have to wait any longer to get a glimpse of the device as few images of fully assembled Moto X (3rd Gen) has been leaked online which shows all about this upcoming device. These leaks shows some of the features which might bump the sale of this device. 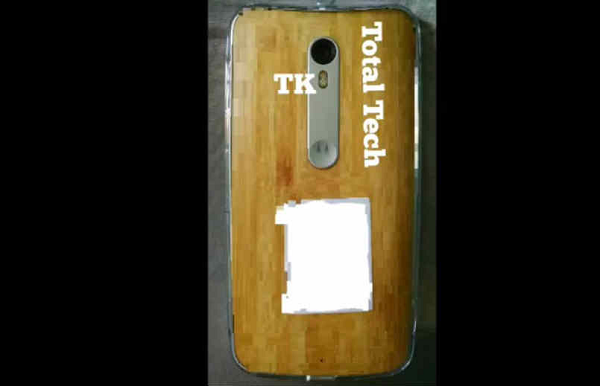 TechTotal has leaked has leaked an blurred image of Moto X which shows it will also be available in wooden back panel, website has also posted a video in which they showed that this upcoming smartphone will feature an USB Type C charging port. Couple of days back at Googl I/O, Google has announced that Android M will support USB Type C port.

According to leak Moto X will get bigger screen of 5.64-inch QHD display (last year variant gas 5.2-inch), it will be powered by a Qualcomm Snapdragon chipset (might be Snapdragon 808 processor) along with 3GB of RAM., and Moto X will offer 21GB of user available storage, and will run on Android 5.1.1 Lollipop out-of-the-box.

Some leaks has also suggested that this upcoming Moto X might have a 16-megapixel rear camera, a 5-megapixel front snapper, and houses a 3,280mAh battery.

Few days back Moto G (3rd Gen) was spotted on Flipkart which also hints that launch could be made sooner than expectation. As per leaks Moto G (3rd Gen) might have 5-inch or 5.2-inch FHD display; powered by a 64-bit 1.7GHz Snapdragon 610 SoC quad-core processor along with Adreno 405 GPU and 2GB of RAM.