We have seen that last year a new trend started in smartphone industry, its selfie trend where users wants to click images using front facing camera rather than traditional rear camera, mobile companies sooner identified this trend and they launched there devices with powerful front facing camera which allows you to take better selfies or even some companies claimed that their device camera can take wide selfie or you can say groupfies.

All major companies like HTC, LG and Samsung has launched their devices with powerful front facing camera and they are performing their job very well in the market. Recently we have also seen an US based company, Infocus entered India market and first device they launched was InFocus M2 (Review) which comes with 8MP front camera with LED flash. Now we have a device from Micromax under its Canvas series, the Micromax Canvas Selfie.

Unlike other candy bar designed phone which we have seen from Micromax, this one is little different, it reminds us of Sony Xperia Arc, Micromax Canvas Selfie has got curves at top and at bottom. At first look you might find that this device is designed for women but we found that its features and build are equally balanced for both. 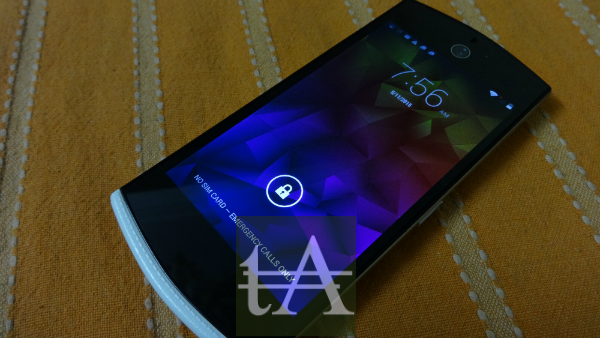 At front you will find 4.7inch IPS display screen with HD resolution which makes screen crisp and sharp, there is also a Corning Gorilla Glass 3 protection on the device which makes it scratch proof. Above display you have a 13MP front facing camera long with LED flash and some sensors.

Below display you have 3 touch capacitive buttons, and your home button will also works as your notification light which means if you have got notification then it will start blinking.

You will find mixture of metal and faux leather on this device, there is a metal rim which runs all across its body, buttons are also finished in metal, and back panel of this device is made up of faux leather which some of you might not like. 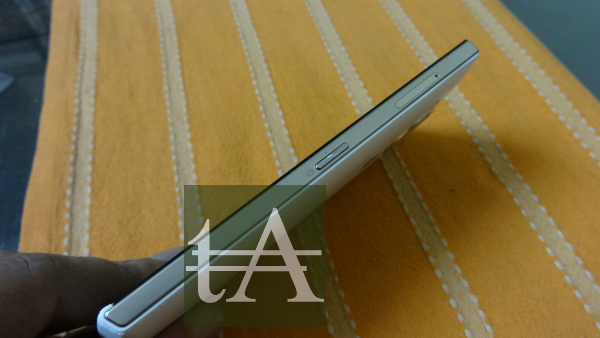 If we talk about connectivity and ports then on right side you have a SIM tray which will accept an Micro SIM card and a Nano SIM card, you can always insert a Micro SD card in place of Nano SIM. There is a dedicated camera button also on right side. 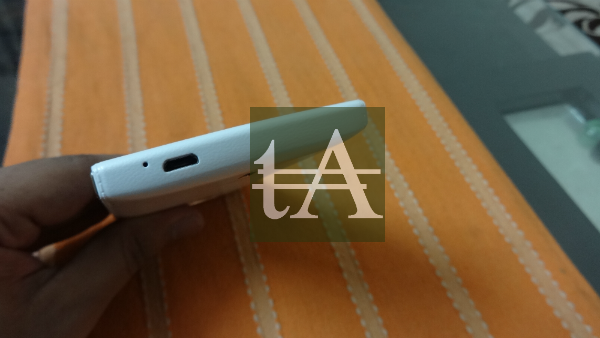 At bottom you will have Micro USB port for charging this device and for data transfer along with your primary microphone. 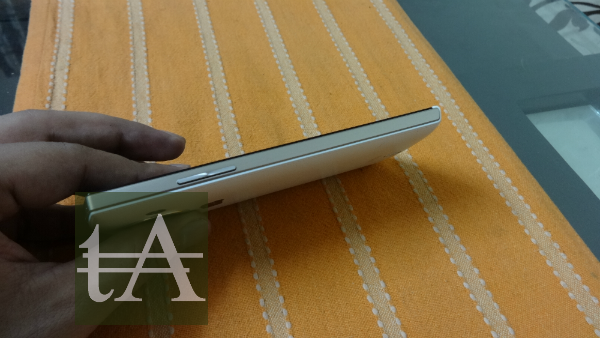 On left side you have your nice volume rockers finished in metal and gives nice feedback to you. At top you will find a 3.5mm Audio jack for your headphone and your Power and Sleep button which is little hard to reach if handling device with one hand. 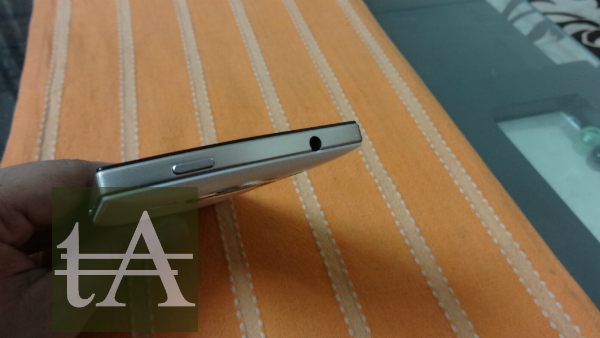 As told earlier you have faux leather finished back panel with stitches running along the edges which we have also seen in Canvas Nitro (Review). There is an 13MP rear camera with dual LED flash. Also you will find metallic Micromax logo at center and a speaker grill at bottom. 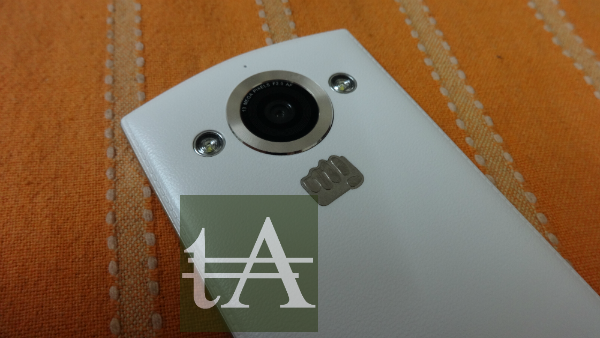 If we talk about under the hood features of Micromax Canvas Selfie the it is powered by an octa-core MediaTek MT6592 processor clocked at 1.7GHz. along with 2GB of RAM and 16GB of internal storage space which you can expand up to 32GB using a microSD card if you dont want a dual SIM device. 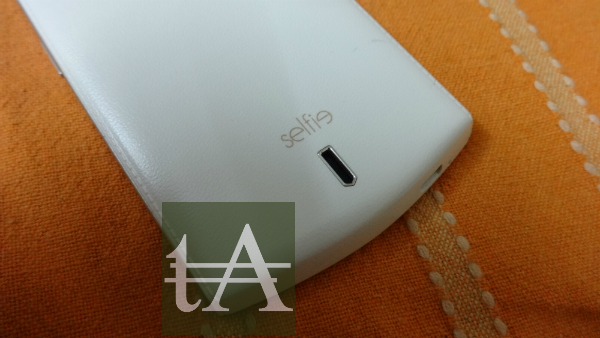 There is an 13MP rear and front facing camera, at rear you have dual LEDs and at front you have single LED, For connectivity it support Wi-Fi a/b/g/n, Bluetooth v4.0, 3G, Dual SIM, GPS and Micro USB.

Here Micromax has decided to introduce its own unnamed Android skin on top of Android 4.4.2 which can be upgradable to Android Lollipop. This skin is very much similar to of what we have seen in many Chinese brands, its flat UI and there is no dedicated app drawer, all icons will be placed on your dashboard, however you can always download and install third party launcher to get your Android like UI back.

Micromax has provided lots of pre-installed apps on this device, and good part is that most of them can be removed. It also supports themes which allows you to change the look and feel of the UI, and there are plenty of themes available which you can download and install on it. 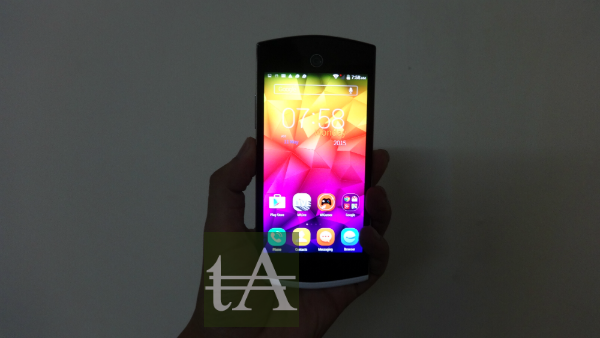 Micromax Canvas Selfie flaunts a 4.7 inch display screen with HD screen resolution, screen is protected by Corning Gorilla Glass 3 and it do provide nice viewing angles. Screen provides decent visibility under sunlight and we have no complaints in this section.

Micromax Canvas Selfie comes with a 13MP front and rear camera and both camera’s can capture good images and details can be seen in images. As this camera is mainly targeted to those who loves to capture selfies, that’s why Micromax has introduced lots of options which you can use to tweak with the image, like you can use Eye enhancement, Face Slimming, Skin smoothening, Remove Oil, fade dark circle, make-up and teeth whitening. 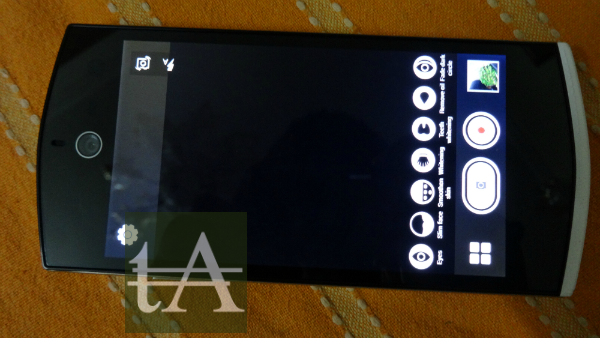 These inbuilt tweaks can make your images look different what you have capture first, but as you notice most of these features are of ladies use like you can apply lipstick, mascara, eye liner and so on. Auto-focus of camera is really well and it tracks your face quickly. In our test we have captures some images and we have no complaints in this section as well. 13MP camera’s are doing there work very well and all images contains lots of details and colors also looks good in them. Here are some sample images which we have captured :- Micromax Canvas Selfie houses a 2300mAh battery which lasted for 8 hours and 34 minutes in our test, we used this device heavily and expected it to last a day but it didnt. However you might get one day of life with average usage.

In our test with Micromax Canvas Selfie we found no lag or any hiccups with the device, we used this device as our daily driver and played games like Blood and Glory, Subway Surfer and Frontline Commando 2, it performed very well.

Micromax Canvas Selfie is powered by octa-core MediaTek MT6592 processor clocked at 1.7GHz, we were hoping for newly launched 64-bit MT6595 chipset but nevertheless, this device did performed very well. We played full HD videos on YouTube and it also went smoothly.

Here are some Benchmark test which we had run on it :- If you go by its name and you are the person who loves to takes lots of images and selfies as well but are not ready to throw some heavy money then its the device which you can go with. However not only camera part, if you go by its performance then also it a good device which can give nice feedback to you.

Micromax Canvas Selfie
Reviewed by Rahul Sharma on May 10 2015
Rating: 4.5