Asus is the only brand in India which seems to take gaming segment serious and on continuous basis, and their ROG series is one of the example which in which they are continuously launching and adding laptops, and due to this ROG series is very hit among gamers as well. If you feel like ROG series laptops are bit more on the costly side, then here is a brand new laptop from Asus, the Asus TUF FX505, which is a addition to TUF series, however the last Asus TUF FX504 failed to impress anyone as it had lots of issues like with its trackpad, firmware and all. But company has high hopes with Asus TUF FX505. 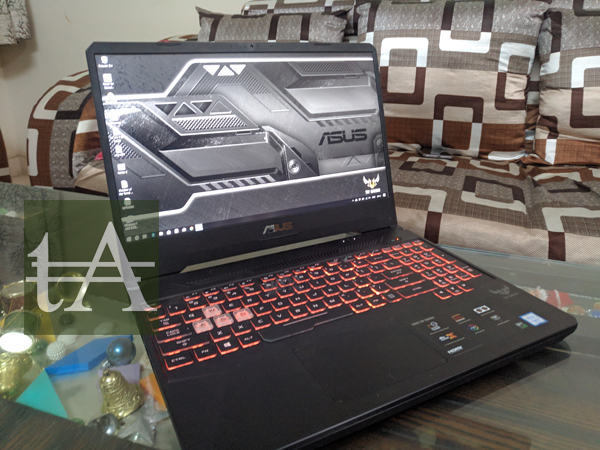 We had used this device for more than 15 days, and its is a tough and sturdy device, and it is surely an update to its predecessor.

This is the department where Asus TUF FX505 stands out and company is also marketing it as tough and sturdy laptop. It is not different than any other gaming laptop which we had seen from Asus, its bulky and weight around 2.2Kg.

This laptop doesn’t fall under ROG series, which results in par quality and you will not find that much superior build quality which we had seen on Asus ROG series laptops.

The bottom and keyboard is made up of plastic, but has aluminium lid which do gives a premium look to the device and we havent noticed any flex on display but yes keyboard has some flex due to all plastic. The Asus logo glows on hinge, but not as much like we have seen ROG logo glowing on ROG laptops. 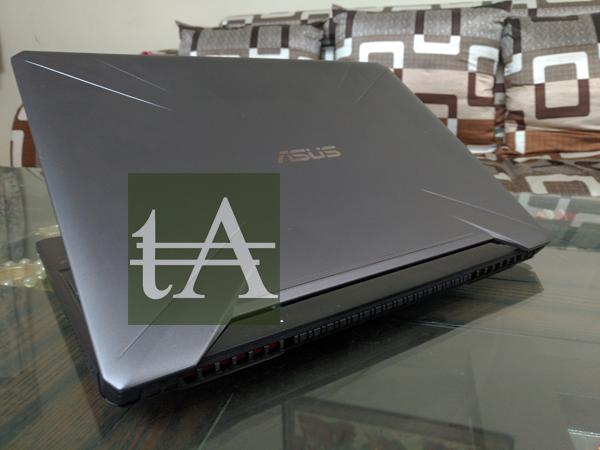 There is a cutout on the hinge side and it shows LED indicators for power, processor involvement and the aeroplane mode, it surely gives the gaming laptop look.

There are vents just above keyboard, just like older TUF models, but here you will find vents on the right side as well which were not there in older models. 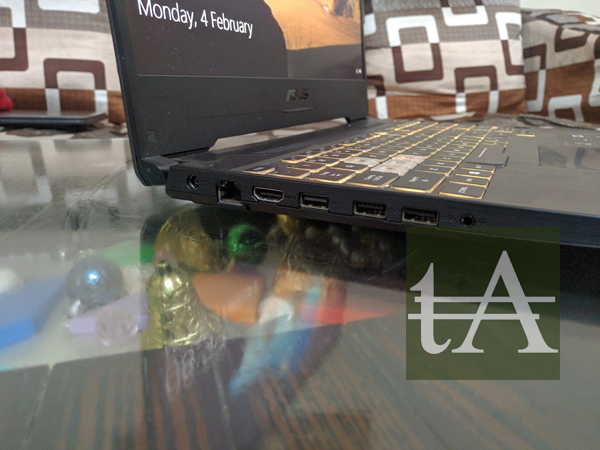 When it comes to connectivity and ports then you will find all ports on the left of it, it has two USB 2.0 ports, one USB 3.0 port, one HDMI port, an RJ 45 Ethernet port and a 3.5mm headphone.

When it comes to the under the hood features, this laptop comes in couple of variants, 8th generations processor i7-8750H processor along with 16GB DDR4 RAM, on storage front it has 256GB M.2 SSD and 1TB of HDD, NVIDIA GeForce 1060 DDR5 6GB of GPU. 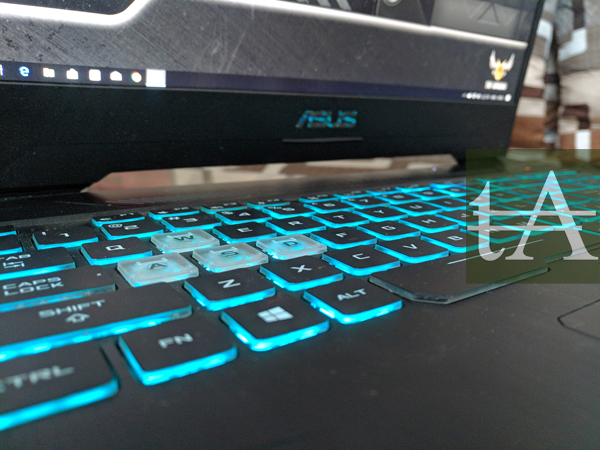 There is another variant which comes with 8th generations processor i5-8300H processor along with 8GB DDR4 RAM, on storage front it has 1TB of HDD, NVIDIA GeForce 1050Ti DDR5 4GB of GPU.

This is the one department where issue comes, Asus TUF FX505 has Windows 10 Pro pre-installed, but when we first booted it up couple of things were not working like trackpad had some issues which was gone after installing drivers.

Keyboard on Asus TUF FX505 is decent with good key travel and you type large documents on itbut while typing on it you will feel that keyboard has some flex on , however this should not be the issue with gamers out there. 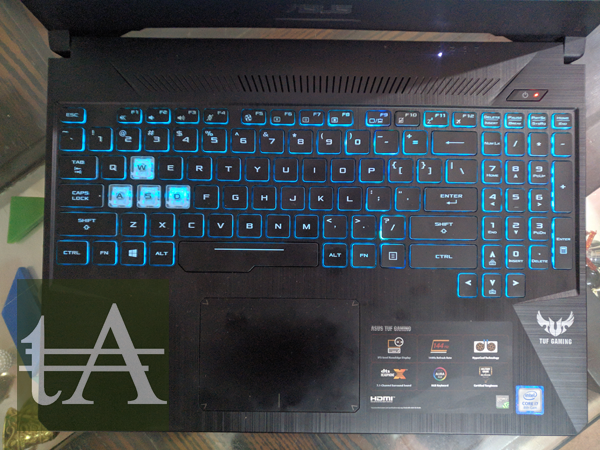 Keyboard do supports RGB backlight and good thing about it is that it does not hit your face and you can easily play with it even on highest brightness.

On the other hand trackpad is good enough for daily work but on our first boot, trackpad was not working as it should be, and we have to manually download and install drivers for it.

Asus TUF FX505 flaunts a 15.6-inch full HD IPS LCD display with a matte finish, and this display has vibrant colors and good dynamic range we had used this laptop in outdoor conditions as well and we never faced any issue. 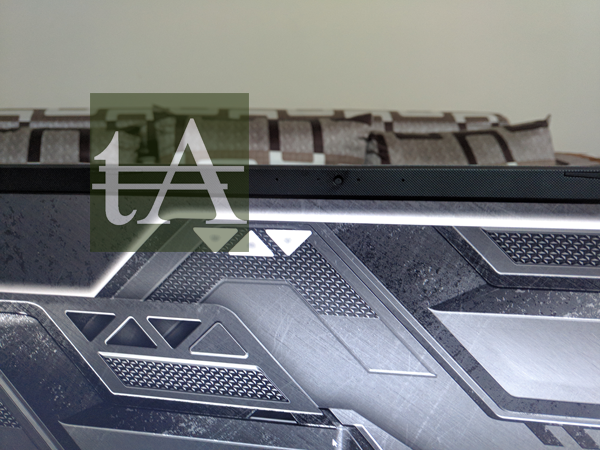 This display has 144Hz refresh rate and 3ms response time which is win win for any gamer out their. The viewing angles are good but however when viewed from extreme angles you will find colors fading out but thats not a major issue as you will be playing game on and viewing screen from front only.

This laptop remains cool most of the time and it manage to adjust the fan speed automatically according to the load on the laptop all thanks to HyperCool Technology and keep laptop under the limits. In most of the scenario it remains silent and it is not noticeable but when you switch to overboost, it become too load. 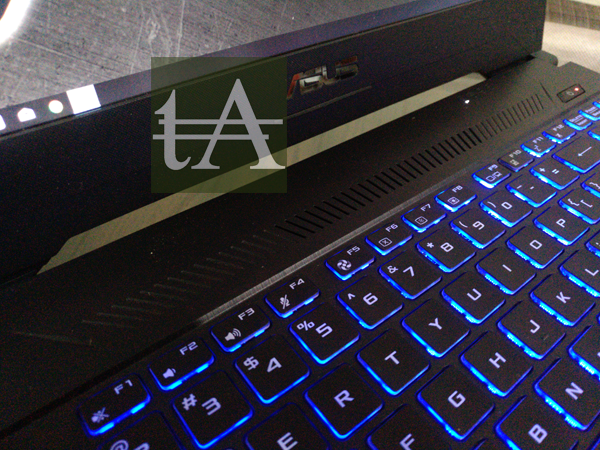 Speakers are one of the segment where it has improved from last generation, speakers are loud and clear, however mids and lows have some deviations and it lacks base as well, but that’s not an issue for a laptop speakers.

Asus TUF FX505 has 3 -Cell 48Wh polymer battery, which can last for up to 5hrs on normal usage, and if you are gaming, then it will last for around 1hrs which is decent enough.

It do comes with a fast charger of 180W and can charge up to 60 per cent within an hour.

Our review unit had Intel i7 8-Generation processor along with 16GB DDR4, 256GB of m.2 SSD and 1TB SSHD, for graphics it has Nvidia GTX 1060 GPU, this combination is quite impressive and can handle almost everything be it like games, video editing and all. 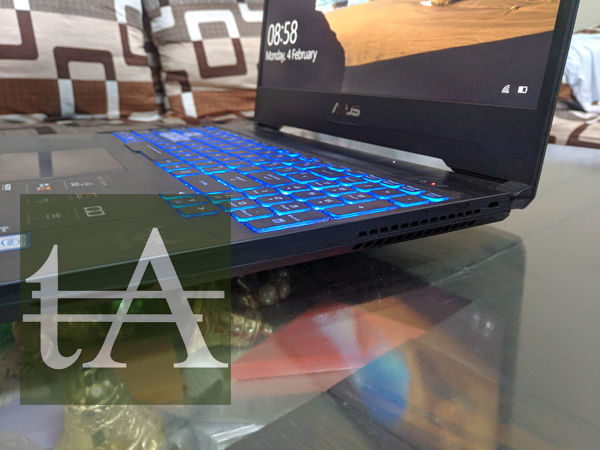 ALl thanks to the CPU which can handle all tasks like video editing, RAW image editing just like a piece of cake, and while gaming also we never had any issue.

We edited an 4K clip n Adobe Premier Pro, and then converted it using Handbrake and all went smoothly yes sometime CPU fan makes noise as you are hitting high performance.

If you like numbers then here are some benchmark results –

We played games like Assassin’s Creed, Tomb Raider, Counter Strike Global Offensive, Far Cry 5, and in all these games we got good FPS and there were no lag while playing these games on higher setting.

Asus TUF FX505 surely is one of the best laptop which you can get at this price tag, it do comes with lots of improvements from its predecessor like speaker, trackpad, and screen. 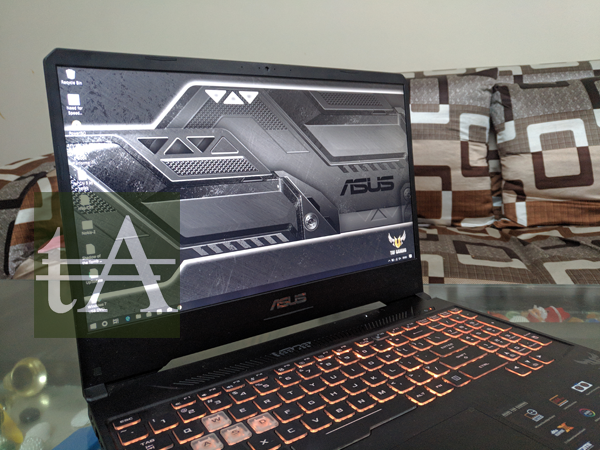 It is an all rounder in gaming need, it can play all modern games on full setting and you wont get any lap or frame drop.

Price of this laptop is the thing which can attract buyers, it has a price tag of around Rs. 120,000 which is fairly good for any gaming laptop which has all latest specs.