Last month Samsung has introduced its premium quality phone, the Samsung Galaxy Golden which is its answer to golden iPhone 5S launched by Apple. Now Samsung has launched this premium phone in India for Rs. 51,900/- 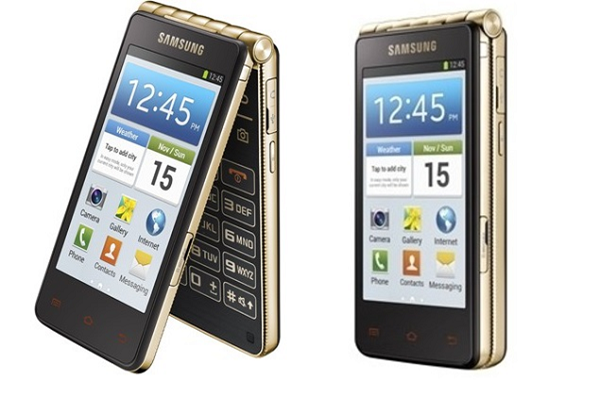 As per specs, Samsung Galaxy Golden flaunts two 3.7-inch Super AMOLED displays. It is powered by an unspecified dual-core 1.7 GHz processor along with 1.5GB of RAM and it runs on Android 4.2 Jelly Bean. It comes with features like Easy Mode, which features large fonts and icons which enables you to access and search apps, and Hidden Receiver, which allows you to receive calls without opening the flip.

Other features of Samsung galaxy Golden are an 8 megapixel rear camera and an 1.9 megapixel front facing camera. It comes with 16GB of onboard memory and for connectivity it has Bluetooth, Wi-Fi and GPS/AGPS, however there is no word on 3G but some websites are quoting 3G. It packs with an 1820mAh battery, but there is no word on talk time or standby time.

Speaking at the launch event, Samsung India’s Vineet Taneja said, “At Samsung, we are committed to making lives easier and smarter for our customers and Galaxy Golden does exactly that. This specially crafted device is aimed at consumers seeking seamless integration of stunning classic design and functionality to make their lives more efficient.”